The Beginning of the End?

The master of cynical obfuscation and deflection is at it again. After the disaster of the G-7 meeting in Canada, the tepid response to the North Korea Summit, and faced with continuing revelations about his allies meeting with Russians during the 2016 campaign to obtain dirt on Hillary Clinton, Trump has done it again. When in doubt, deflect attention, and the best way to do that is by exploiting an issue that galvanizes your base — immigration. Trump’s problem, however, is that he has massively miscalculated the public’s outrage about separating children from their parents at the border. These families are not your so-called “Mexican rapists and murderers,” our President’s celebrated description of immigrants, but are people who have traveled thousands of miles to escape violence and oppression in places like Honduras, El Salvador, and Guatemala. In what is emerging to be “Trump’s Katrina,” even faith leaders from the evangelical branches of Christian denominations are criticizing Trump for his heartless child separation policy. It did not help to have an audiotape of a child crying out for her parents broadcast on the national news.

Trump’s response, as usual, is to deflect and blame someone else. In the classic Orwellian speech tactic, he is discussing the separation policy as if it is a requirement of law and has seen fit to blame the Democrats for the problem.

Trump’s “zero tolerance” policy, which is resulting in the separation of many innocent migrant children from their parents, is, purely and simply, immoral and un-American. It will probably prove to be ineffectual as well, as was recently argued by former Secretary of Homeland Security Jeh Charles Johnson. Changes to immigration enforcement policy have only short-term effects, at best, and migration patterns may return to higher levels because the circumstances causing families to flee to the U.S. have not changed.

Where are the Republicans?
Where have Republican Congressional Leadership or the Party been on this issue? For the most part, they have either been silent or, as is the case with Congressman Dave Brat, taken to the airways to parrot the talking points of the administration. Republican Senate candidate Corey Stewart is totally in his element, having demagogued the immigration issue for years. As the public political pressure continues to mount, expect some softening of the rhetoric, but it remains to be seen whether party leadership has the will to buck their President on an issue so important to their base.

In response to the controversy, administration spokespersons, from Attorney General Jeff Sessions to Sarah Huckabee Sanders to Homeland Security Chief Kirstjen Nielsen, parse words to suggest that the law requires this approach, yet another “alternate fact” that needs to be called out for the lie it is — the law requires no such action.

Virginia National Guard Not Participating
Congratulations to Gov. Ralph Northam and other governors who are removing state National Guard personnel who have been involved in this travesty.

What Can Be Done?
At this point, there are only two lines of defense against this policy. The first will come in the form of a court action and the power of lawyers. The second will come at the polls with the midterm elections. Given Republican intransigence in the Congress, the only way to really make a change is to change the people who sit in the seats. 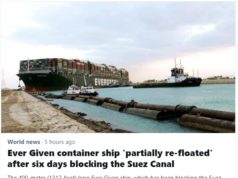 Monday News: Ship Partially Freed in Suez Canal; “U.S. Is In A Race Between Vaccines And Variants”; “The GOP’s big lie on voting rights”;...