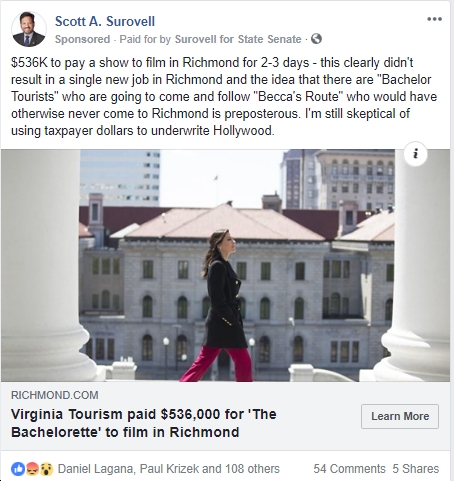 I’m 100% with Sen. Scott Surovell on this one: it is “preposterous” that Virginia taxpayer money — $536K of it, no less – was used “to pay a show to film in Richmond for 2-3 days,” something that “clearly didn’t result in a single new job in Richmond” and basically is just “using taxpayer dollars to underwrite Hollywood.” See below the screen shot for some comments from Sen. Surovell’s Facebook post, all of which I strongly agree with.

In general, I’m not a big fan of taxpayer-funded corporate welfare, particularly when it’s doled out to things that don’t provide a clear net benefit to taxpayers/citizens and/or a broader social good. In this case, we’re actually subsidizing a stupid, highly problematic “reality television dating game show?” Why? Seems like a (really) bad idea to me, especially since it appears that state film subsidies amount to “not much bang for too many bucks.” Also see this November 2017 study by Virginia’s Joint Legislative Audit and Review Commission (JLARC), which found that: