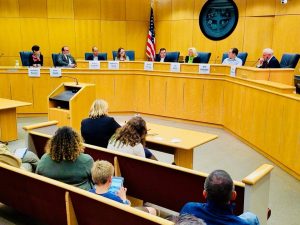 Last night, Delegate Jennifer Boysko (D-86) held a town hall in Herndon to discuss “the future of energy in Virginia” (see video at the bottom of this post). The panel speakers were Hayes Framme from Ørsted (Danish offshore wind company that is partnering with Dominion on a pilot offshore wind project in Virginia), Katharine Bond from Dominion Energy, Scott Emery from Zero Carbon Virginia, Ivy Main from the Sierra Club, Will Gathright from Tumalow (energy storage startup company), and Eric Holdsworth from Edison Electric Institute (the main association of investor-owned electric companies has fought hard nationally against net metered solar – and whose chairman denied the science of human-caused global warming in March of 2017). The discussion was moderated by Flint Webb from the Air and Waste Management Association; which is a nonprofit, nonpartisan organization that provides “a neutral forum for exchanging information” (I suspect this is a euphemism for environmental “bothsides-ism,” but I’m not sure.)

Before I get to the details of the event, I can’t ignore a couple of elephants in the room. I’m so sorry, Katharine Bond of Dominion, you’re perfectly lovely and I don’t mean to call you an elephant, but inviting a Dominion lobbyist (and others who don’t have a clean environment as their number one objective) to a discussion of why Virginia is moving so slowly towards renewables, efficiency and clean energy made for a certain awkwardness, since everyone in the room was aware that Dominion’s objectives do not align with the environmentalists’-–unless the legislature or regulatory agency forces them to be.

The other elephant in the room is about 42” wide and tromps through some of the most beautiful land, forests, and family homes and farms in all of Virginia. It was made clear from the minute the town hall was announced that this was NOT to be a discussion about the pipelines. Given the current frustrations that environmentalists feel about the continued construction on the MVP and ACP despite the damage they’re doing, the hazards they pose to the residents and to the environment, and their needlessness, discussing Virginia’s energy future without mentioning the pipelines was like cleaning a window with a muddy rag. At the request of pipeline activists, Delegate Boysko did allow a table to be set up outside the room with information about the pipelines, and that helped appease the crowd, but did not change that it is ridiculous to discuss renewables investments while ignoring the continued investment in fracked gas pipelines.

Despite these drawbacks, there was some good discussion. The consensus: Virginia has enormous potential to transition to 100% renewables or zero carbon by 2035, through some combination of utility-scale solar, consumer-owned (distributed) solar, offshore wind, efficiency improvements, storage technologies, and carbon-free technologies. But we are not currently pursuing ANY of these with sufficient urgency because legislators and regulators are not mandating it.

A few points made on each of these:

At one point Delegate Boysko asked “So, what’s stopping us?” There was awkward laughter in the room, because frankly, it’s primarily the legislature that’s stopping us. Utility companies aren’t going to just decide on their own to abandon the huge natural gas and investments they’ve made over the last fifty years and adopt renewables. They’re not going to voluntarily reduce demand for their own product by pushing distributed solar and efficiency programs. And even if they did, the regulatory structure isn’t conducive to approving such changes.

The 2018 Grid Transformation And Security Act was a tiny baby step in the right direction—at a time when we need to be sprinting. And, it was noted by one panelist that the approach was still “what are the utility companies willing to do,” rather than “what should the legislature mandate be done?”

We have to rethink how we regulate the utility industry. Dominion’s objectives are to 1) meet supply, 2) comply with regulations, 3) at the lowest cost. Their shareholders demand low-risk and maximum profits. Unless we want to wait for it to be in their shareholders’ interest to transition to 100% renewables, we will have to change the regulatory system and incentives so that they are required to.