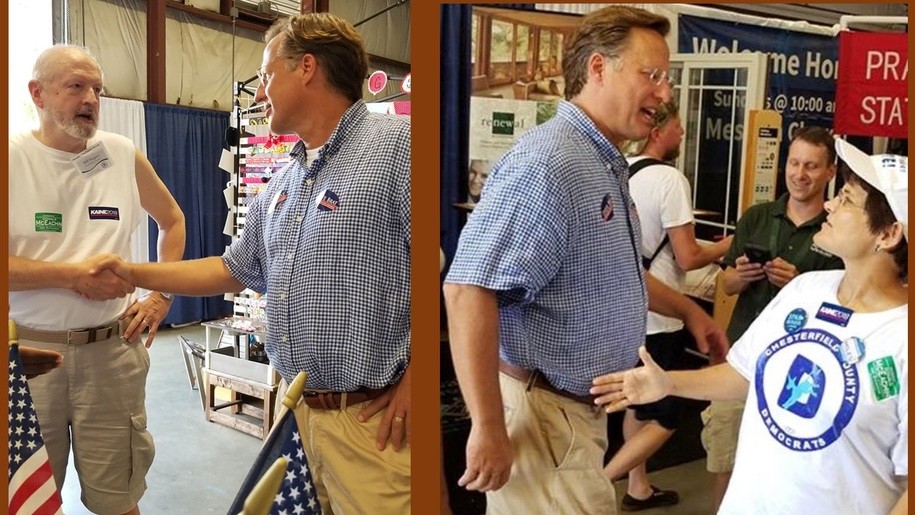 Dave Brat is clearly not getting proper medical care: he didn’t get vaxxed against girl cooties!! That’s the only thing that can account for this bizarre incident at an outdoor event in Virginia on Saturday:

In what world would women see his shaking a woman’s hand as anything other than normal courtesy?  Is Brat implying that women would falsely accuse him of assault if he shakes their hands?  If that’s it (and I can’t put a different construction on it), then that’s hideously insulting to assault victims.  Or is there another interpretation?  The whole thing is so bizarre it’s hard to know.

And then he asks Marni Pilafian to get the liberal blog Blue Virginia (not Virginia Blue) to “lighten up” and “get off him.”  Excuse me, Mr. Brat, are you under the misapprehension that we’re playing softball?

Brat’s unforced error caps a rough week for him.  Paul Ryan’s superPAC, the Congressional Leadership Fund, has been caught having released Democratic opponent Abigail Spanberger’s highly confidential application for a security clearance to work at the CIA.  The PAC has also tried to smear Spanberger’s reputation, alleging that she has ties to terrorists, when in fact she spent eight years after 9/11 trying to protect us from terrorists (see John Harwood’s account and a critical letter written by 200 national security veterans).

Brat has serious problems with women.  He notoriously whinged to supporters that “The women are in my grill no matter where I go” when he faced vociferous criticism from female constituents (whom he referred to as paid protestors) over his vote to repeal the ACA.  For this, his alliance with Trump’s voting record, and his votes on healthcare, wages, and reproductive rights, Brat made it to The Bridge Project’s “Worst for Women” list.

But hey, instead of having this joker in office, we can elect Abigail Spanberger, a terrific woman with a superb record of courage and patriotism.  And she shakes everyone’s hand.

Please also consider a CONTRIBUTION(even a small one) – or perhaps you can sign up to VOLUNTEER (virtual phone banking is among the options).

Check HERE to see if you live in VA-7.

And please – more than anything: make sure everyone you know gets out to vote on November 6th!

Totally unacceptable (but sadly not surprising) behavior towards @Michael092218 by the Youngkin volunteer or staffer https://bluevirginia.us/2021/10/saturday-news-democrats-narrow-differences-on-bidens-agenda-mull-billionaire-tax-january-6-wasnt-a-riot-it-was-war-facebook-allowed-hate-illegal-activity-to-go-unchecked#comment-5581951612

Brutal, but 100% accurate by the WaPo - "Youngkin chose to dignify a fundamental fiction that is subverting our system, rather than stand up squarely for the truth. In so doing, he proved himself unfit for office." https://bluevirginia.us/2021/10/video-photos-with-10-days-until-election-day-former-president-barack-obama-campaigns-for-the-va-democratic-ticket-at-vcu-in-richmond#comment-5581910856