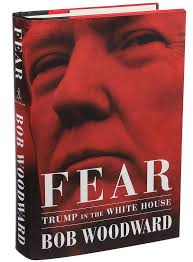 Donald Trump believes fear is the ultimate path to power over people.

Whether it’s voters, global adversaries, political opponents, or cabinet secretaries, fear is a tool that Trump employs to get people to do what he wants. Fear is the recurring theme throughout 448 pages of Bob Woodward’s new book, “Fear: Trump in the White House.” The president continues to lean on fear, using people’s fear over his irrationality or explosive nature to coerce them into executing his policy “positions.” Trump is described in “Fear” as loving conflict; that it stirs folks up and allows him to ensure that their differing opinions prevent groupthink.

As readers trying to keep up over the course of this book, what we’re left with when the dust settles is the tale of a mean old man and the people around him desperately trying to save themselves, and maybe our country in the process. While slightly entertaining, hearing repeated stories of various staff members removing documents from the president’s desk or deliberately slow-walking paperwork knowing that Trump will be distracted and forget is truly disturbing.

Two big themes jumped out at me while reading: there are no good guys in this story and you won’t find anything new here.

Bob Woodward’s array of credible sources and clout provided him access to talk to people, and about programs, that someone like Michael Wolff (Fire and Fury, 2018) or Omarosa Manigault Newman (Unhinged, 2018) couldn’t. The problem is, this access doesn’t provide any new insights or tangible takeaways. We already knew that Secretary of State Rex Tillerson thought Trump was a moron. Reports that White House Chief of Staff John Kelly thinks Trump is an idiot or that Defense Secretary James Mattis thinks Trump has the comprehension of a 5th or 6th grader may technically be new bits of information.

In reality, they fit the same picture we already knew existed; that the President is childish, incompetent and singularly focused on self-enrichment. As called out time and time again throughout the book, Trump only cares about trade deficits and his opinion that we’re paying too much or getting ripped off. Senior advisors appear to be stunned that he seems incapable of grasping anything other than the financial cost of doing national security business, regardless of the amount of lives saved or other benefits.

Using a form of third-person narration, Woodward is able to provide direct quotes obtained from hundreds of hours of interviews while masking the identity of his source. Over the course of the book, the words f*ck and sh*t are used extensively, making the audiobook difficult to listen to with kids around.

Woodward also seems to focus heavily on the accounts of  Rob Porter, the staff secretary begrudgingly ousted earlier this year after credible reports of domestic abuse surfaced, and Gary Cohn, the chief economic advisor who Trump leaned heavily on for most matters. With the exception of maybe Jim Mattis, Cohn and Porter are the only individuals portrayed in an a positive light when contrasted with the rest of the administration. This overreliance on Cohn and Porter leaves one to assume they provided much of the sourcing and context used in the book (which also makes you question some of the veracity regarding Rob Porter’s account, who may be looking for redemption in regards to the aforementioned abuse allegations, which the book glosses over in a few short sentences).

I believe Woodward missed a big opportunity to compare his reporting here with its obvious parallel; the last days of the Nixon administration. Instead, Woodward chose to give us a pretty standard, albeit well-sourced and expletive-filled, account of the day to day chaos that is the Trump White House.

The book itself isn’t really about Trump; it’s about the logical conclusion of where our politics have been heading for a long time. Ultimately, “Fear” is like reading the Trump White House account in the Lifestyle and Entertainment sections of the Washington Post as opposed to watching it on TMZ. The reader gleans the same information, but is able to pat themselves on the back for getting it out of a reputable paper instead of a gossip rag.

If this is a story about the Trump administration, then “Fear” gives us ample context to cast judgement on those serving within it. The actions of these various staffers have received a mixed reception in the media, after revelations of their “resistance” efforts started to leak in advance of the book — a notable example being the anonymous NY Times op-ed.

Personally, I’m not buying it. Many individuals seeking jobs in this administration did so hoping that it would build their resumes or allow them to push through their personal agendas (read: Gary Cohn). When they realized how much of a clown show this administration truly was and that Trump wasn’t play acting all along – that he really was an irrational and nasty old man – they wanted out. What the rest of us have known since Trump rode down that golden elevator in 2015, some folks are just now figuring out, after they’ve had the opportunity to cash out. In my opinion, they deserve zero sympathy from the majority of us who have rejected Trump and everything he’s stood for, for almost three years now.

If I had to grade this book like a writing assignment, I would give it a B-. Woodward has a solid grasp of the facts, but the expletive-filled quotes and failure to provide any new insight left me not really wanting more. If you’re looking for palace intrigue but don’t want to sink down to Michael Wolff or Omarosa, than this book might scratch that itch.