From Del. Rip Sullivan…if it’s Friday, it must be time to “Flip-a-District!” 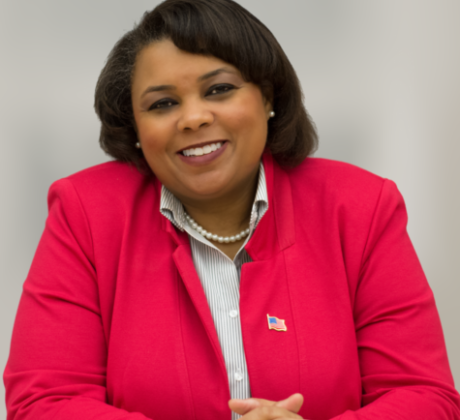 Vangie Williams is a public servant who solves problems for our federal government. A successful professional with 30 years of experience, Vangie is not a career politician. Instead, she’s a proven leader who was called upon during our nation’s darkest hour after 9/11 to help create the Transportation Security Administration and hire nearly 70,000 federal employees. From managing operational projects for NASA and the U.S. Navy, to serving as a mentor for youth sports programs, Vangie has always served her country and community.

As the wife of a small business owner and mother of six daughters, Vangie put herself through school like many working parents to create more opportunities for her family, ultimately earning four degrees. Vangie is a long-time resident of King George, Virginia and is committed to America’s First District by putting people first. Her vision for the Commonwealth includes: an economy that works for everyone, healthy families with access to world-class healthcare, and investment in our communities and hometown heroes.

This District includes parts of 21 different counties and the entirety of the city of Fredericksburg. It is currently represented by Rob Wittman, who has been in office since a 2007 special election. Although the district has a Cook Partisan Index of R+8, recent polling shows that the 11-year incumbent has a favorability rating of only 34 percent.

Virginia’s 1st Congressional District is also known as “America’s First District” since it originally included Jamestown, the country’s first permanent English settlement in the New World. It has a long history of racial struggles, making Vangie’s primary win so much more noteworthy. She became the first woman of color to secure the Democratic nomination in the First District, which hasn’t even held a Democratic primary since 1976.

Just one example of why Rob Wittman must go:

The First Congressional District, which represents a significant portion of Virginia’s coastline, is extremely vulnerable to the effects of climate change. In fact, the surrounding area is second only to New Orleans when it comes to coastal regions in the United States at risk for extreme sea level rise.

Yet Rob Wittman has actively promoted legislation that will exacerbate the effects of climate change in the First District. From voting to slash the EPA’s budget torolling back restrictions on pollutants that dirty our air to promoting fossil fuels tomuch, much more, Wittman has a clear anti-climate change agenda that he has been promoting since he was first elected.

To add to his anti-environmentalist stance, Wittman also supports off-shore drilling in the Atlantic. It is an extraordinarily dangerous position given how susceptible the First District would be to any drilling-related disasters. He even bragged about his vote, claiming that “Virginia has the opportunity to develop offshore energy in an environmentally friendly manner.” Offshore drilling is clearly not environmentally friendly.

Federal Election Commission reports show that, just this year, Wittman has accepted thousands of dollars in contributions from the National Ocean Industries Association, an offshore drilling company, as well as NiSource Inc. and Sempra Energy, both natural gas companies. The First Congressional District deserves someone who puts the safety and health of the District’s water, land, and residents ahead of corporate interests.

This concludes Volume VIII of our 2018 Flip-a-District Friday series. Stay tuned for weekly updates as we track the key races in Virginia that will determine the balance of power in Congress.

Statement from @HRC: "Glenn Youngkin’s opposition to marriage equality is yet another example of how far outside the mainstream and out of touch Youngkin is" https://bluevirginia.us/2021/10/brutal-profile-of-glenn-youngkin-exposes-his-extreme-right-wing-politics-and-repulsive-personal-attacks#comment-5580780683