Just when you think that neo-Confederate Corey Stewart can’t get more bats*** crazy, he goes ahead and does so. And no, despite what that brain-dead Washington (Com)Post article tried to claim, of course Corey’s not “rebranding” – hahahaha, nice try/#FAIL at creating a narrative, guys! Anyway, see below for Corey’s latest lunacy…touting his appearance with Jeanine Pirro at Liberty “University” this morning, and of course the lunacy he spewed out while AT Liberty “University.” See below the video for my comments.

So…at Liberty this morning, Corey tried to argue regarding Brett Kavanaugh that “they” are “trying to tear down a good man,” that “they” are “smearing him,” and that “in the process they’re smearing all of America.” Oh, and who are “they?” According to crazy, conspiratorial Corey, it’s of course the “far left” (translation: basically every Democrat, a LOT of independents, most women, Republican Senators like Lisa Murkowski, Jeff Flake and Susan Collins, etc.).

Oh, and WHY is the “far left” doing this to poor ol’ Brett Kavanaugh? Because, according to Corey, the “far left” doesn’t want a Supreme Court justice who will do whatever the NRA wants, take away a woman’s right to choose, give corporations carte blanche to trash workers and the environment, etc. Of course, Corey doesn’t put it that way, but in effect, that’s what he’s arguing we should all be supporting, I guess. So that’s a complete load of manure.

But wait, it gets even worse, as crazy/conspiratorial Corey dredges up his new talking point about how “Congress has paid $17 million in settlements for sexual harassment and sexual predator claims against members of Congress; the very men and women who are accusing Judge Kavanaugh of sexual harassment or sexual harassers themselves.” So yeah, Corey Stewart is actually claiming that anyone, including women, who accuses Kavanaugh of sexual harassment – Christine Blasey Ford, Deborah Ramirez, Julie Swetnick, etc. –  is a sexual harasser herself. My god. Oh, and as for that $17 million, according to Snopes, this fund “was established in 1995 with the Congressional Accountability Act and is used for the payment of awards and settlements…overseen by the House Administration and Senate Rules committees.” What relevance does this have to anything we’re talking about right now? Got me, but Corey must think he’s got something here, since he mentioned it in the NBC debate the other night and now at Liberty “University.” Whatever. 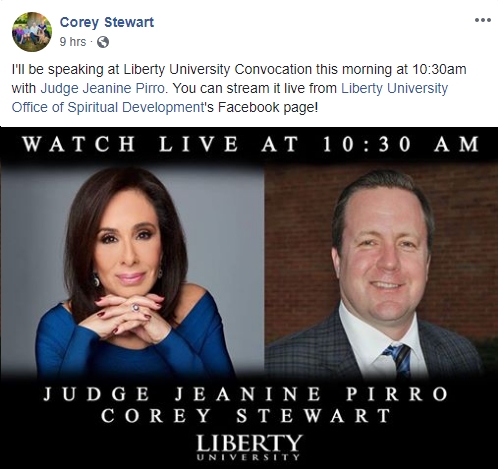 Finally, check out Corey touting his appearance at Liberty with Alex Jones-style, far-right, conspiracy theorist extremist Jeanine Pirro. For more on Pirro, see here, including the following. And just remember, as you peruse Pirro’s ouevre of insanity, our old pal George Allen’s quote about how “You can tell a lot about people by the folks they stand with.” You sure can…you sure can!