If Marc Elias thinks this is a “great choice” (see his tweet, below), I’m confident that it is. To learn more about Bernard Grofman, click here. Among Professor Grofman’s books are Minority Representation and the Quest for Voting Equality, Legacies of the 1964 Civil Rights Act, Race and Redistricting in the 1990s, Political Gerrymandering and the Courts and many more. Professor Grofman’s published articles include “Crafting a Judicially Manageable Standard for Partisan Gerrymandering: Five Necessary Elements,” “Identifying and remedying racial gerrymandering,” “Measuring compactness and the role of a competent standard in a test for partisan and racial gerrymandering,” and “The use of ecological regression to estimate racial bloc voting.”

By the way, recall that on September 14, the U.S. District Court for the Eastern District of Virginia ordered, among other things, that “On September 28, 2018; October 5, 2018; October 19, 2018; and November 2, 2018, the Intervenor-Defendants shall file status reports on the progress of the redistricting efforts in the General Assembly.”  Finally, note that this case involves the courts finding this past July that 11 Virginia House of Delegates districts constitute an unconstitutional racial gerrymander which needs to be remedied. Since then, Virginia House Republicans have been doing everything they can to stall and/or stop these districts from being fixed, because clearly they are worried about losing several of their seats – and their majority – without their racial packing scheme in force. Sad, eh? 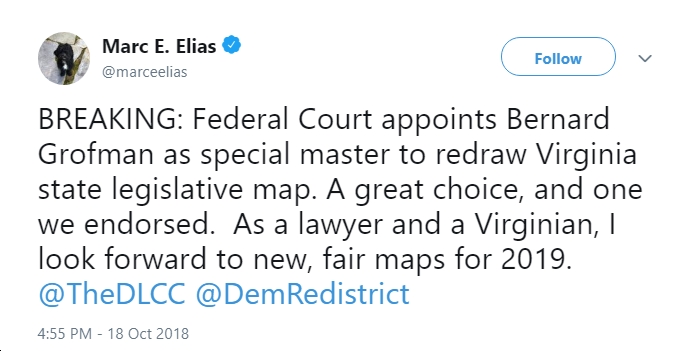 Does Chase pass any legislation at all? https://bluevirginia.us/2021/01/tuesday-news-senate-power-sharing-deal-moves-ahead-biden-sets-sights-on-1-5-million-vaccinations-a-day-schumer-calls-for-biden-to-declare-climate-emergency-businessman-pete-snyder-jo h/t @vaplan2018