Recently, the Washington (Com)Post had an article (note: I refuse to even link to such trash) that desperately tried to create a (false) narrative about Corey Stewart (supposedly) attempting a “rebrand” from his white nationalism, xenophobia, lunatic conspiracy theories, etc. Since then, Corey has unsurprisingly done the EXACT OPPOSITE of a “rebrand,” instead doubling down on his lunacy, wild conspiracy theories, slanderous accusations, and now…this. That’s right, Corey Stewart “just retweeted a spam/bot account with [white nationalist symbol ‘Pepe the Frog’] and ‘#Qanon’ in its bio because they called @timkaine a ‘Demonrat.'” Also, check out Corey’s completely unhinged/insane performance at last night’s debate, which basically was a carbon copy of Corey’s completely unhinged/insane performance at last week’s NBC debate. Quite the “rebrand,” eh?

P.S. The reviews of Corey’s performance last night have been scathing, including from Virginia conservatives like Rollin Reisinger (“Corey Stewart is falling apart in tonight’s #VASenDebate — little more than poorly delivered bait and sound bytes being filmed for social media”) and from conservative blog Bearing Drift (“After this debate it’s clear that the needle will not move in the race, in fact if it goes in one direction I think Kaine benefits. If I were a republican member of Congress in Virginia, especially in the 10th, 7th, 5th, and 2nd I would not be happy about Stewart’s performance tonight as it puts my seat more in jeopardy.”) 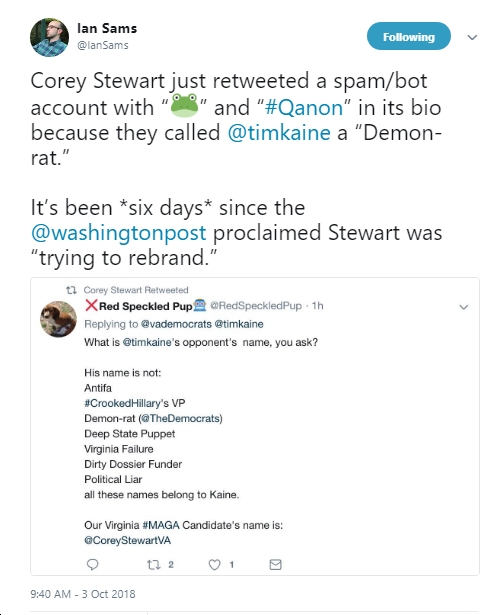 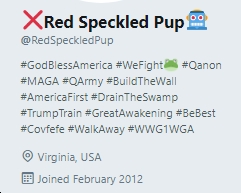