According to this WaPo article (note: see how that’s done, WaPo? it’s called a LINK and CREDIT – what a concept, eh?) 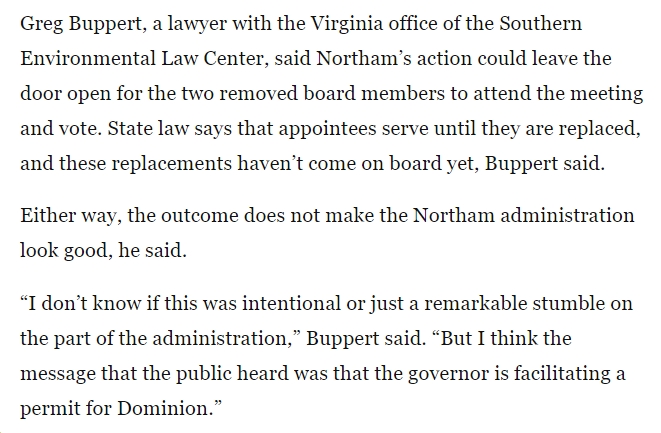 If it’s accurate that “[s]tate law says that appointees serve until they are replaced, and these replacements haven’t come on board yet,” then I’d argue for dismissed Air Board members Samuel Bleicher and Rebecca Rubin to simply show up at the December 10 meeting and demand (with cameras rolling, of course) that they be allowed to vote on Dominion’s proposed fracked-gas-pipeline compressor station in Union Hill. What will happen then? Will the state police force them to leave? Will there be an impasse? Other?

In addition, we should all be demanding that Northam reappoint both of these exemplary public servants, who were dismissed under VERY suspicious circumstances, ASAP.  Finally, we need a full investigation into the circumstances of Bleicher’s and Rubin’s dismissals, about which Del. Mark Keam wrote on his Facebook page a few hours ago, “the decision by Governor Northam to fire appointees of the State Air Pollution Control Board who disagree with him right before they were about to vote on a major environmental racial justice issue is absolutely wrong, and there simply is no way to explain it away.”

The question is whether the legislative branch, and also AG Mark Herring’s office and other appropriate authorities, will demand answers to what looks like HIGHLY suspect behavior on the part of the Northam administration, quite possibly on behalf of the most politically powerful corporation in the state, Dominion Energy? We, the citizens of Virginia, deserve answers. And no, the fact that Northam is a Democrat does NOT mean that Democrats shouldn’t criticize him or investigate his behavior if/when, as in in this case, it appears to be highly inappropriate and/or corrupt. And what’s with this bulls*** “working papers” exemption to a 100% legitimate FOIA request (by Wild Virginia and Virginia Mercury)???

P.S. For background (a “tick tock” as they say in the journalism business) on this story, see here.

P.P.S. If you’re so inclined, you can call in to WTOP at 202-465-3090 (or leave a comment on their FB page) at 10 am this morning and ask Northam WTF is going on? https://www.governor.virginia.gov/about-the-governor/governors-calendar/events/november-2018-events/title-of-event-836664-en.html