Despite the defeat in November 2017 of rabid anti-LGBT bigot and far-right Republican “Sideshow Bob” Marshall by Democrat Danica Roem (poetic justice, anyone???), the Virginia General Assembly continues to list among its ranks some really bad, anti-LGBT members. All of them should be targeted for defeat next November, of course, but for today I just wanted to focus on one of them: Del. Dave LaRock, who (mis)represents HD33 (western Loudoun County, Frederick County, Clarke County). This is a tough district for Democrats — Ed Gillespie won it with 54% of the vote in 2017; Corey Stewart won it with 50.4% of the vote in 2018 – but not unwinnable, given a strong Democratic candidate/campaign and given how extreme LaRock is.

For an example of LaRock’s anti-LGBT bigotry, see below, in which he rants and raves about the Loudoun County School Board supposedly “lurch[ing] left,” because it called for the following (supposedly) horrible things (horrible in LaRock’s anti-LGBT mind, that is):

What’s wrong with any of that? According to Dave LaRock, repeal of the “religious exemption” would supposedly “would force homeschoolers to have their curriculum pre-approved by the public schools!”; being against discrimination would supposedly lead to “pro-LGBT special treatment for school employees- this is not needed, and would be detrimental to school safety”; and making schools gun-free zones would supposedly “prohibit currently-legal right to self-defense in certain public buildings”

By the way, none of this is new for Dave LaRock, whose issues page kind of says it all (brags about his “A” rating from the NRA; staunchly against a woman’s right to choose; against Medicaid expansion; etc.). For more on LaRock’s record, see Project Vote Smart, which shows him to be hard right basically down the line, and VAPLAN’s scorecard, which ranks LaRock as the 10th-most right-wing member of the Virginia House of Delegates. Finally, check out articles like Dave LaRock Spews Anti-LGBTQ Hate Straight From the House of Delegates and Talking to My Delegate: Dave LaRock (in which LaRock talked about how “beautiful” discredited/harmful gay “conversion therapy” is; refused to call Danica Roem “she”; etc.). In 2019, it’s high time that HD33 replaced this embarrassment. To learn more about LaRock’s Democratic opponent, Mavis Taintor, click here (note: currently, no other Democrats have declared for this race, and I’m not sure if any will, but if they do, I’ll certainly update this accordingly). 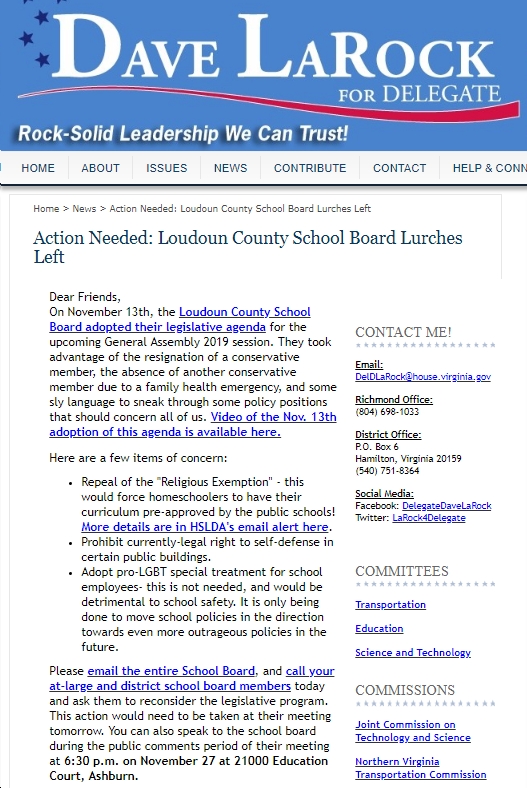