Since my last update on November 27, there have been a bunch of bills “pre-filed” for the 2019 Virginia General Assembly session that starts on January 9, 2019. See below for a few that caught my eye (and see here for all the bills introduced so far).

First, here’s a bill by Del. Marcus Simon (D-Falls Church) to ditch terms like “husband” and “wife” in the Virginia Code and to replace them with gender-neutral terms; to repeal the statutory prohibition on same-sex marriages and civil unions and to make applicable to all persons – regardless of gender – certain crimes, such as “placing or leaving one’s wife in a bawdy place” and “defaming the chaste character of a female.” I’m really curious what’s considered a “bawdy place” nowadays, and how “defaming the chaste character” is defined. Can’t wait to hear this one debated in committee next year! Haha. 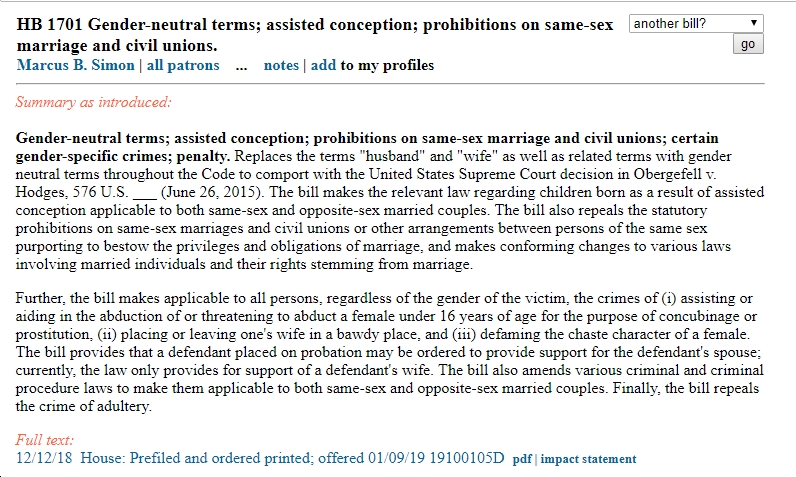 Not 100% sure what to make of this bill by Del. David Reid (D-Loudoun County), but it appears promising…no more fossil fuel facilities after July 1, 2019, “before first approving the construction and placing in service of renewable energy generation facilities having in the aggregate a rated capacity of 5,500 megawatts.” Personally, I’d like to see a mandatory, 100% clean energy “RPS” in Virginia, with the target date as soon as possible. But I guess for now, until Democrats take control of the General Assembly, this might be at least move us forward towards where we need to be…

This bill almost certainly won’t pass in a Republican-controlled legislature, but should be high on the list for a Democratic-controlled General Assembly, hopefully starting in January 2020.

Another bill that should be a no-brainer, but that almost certainly won’t pass as long as anti-environment Republicans are in charge. Yet ANOTHER reason to make sure you vote in 2019 – for Democrats, up and down the ballot!

And finally, there’s the following bill…by a Republican, of course. First of all, what is this unscientific nonsense about “nuisance species?” Second, what is it exactly about blackbirds, crows, cowbirds, grackles, English sparrows, starlings, etc. that makes them “nuisances” anyway? Third, what is the pubic policy rationale for allowing people to shoot – or attempt to shoot – said “nuisance species” from “an automobile or other vehicle?”

Some of the "replacement theory" ads by Elise Stefanik, who has endorsed two Republican US House candidates in Virginia https://bluevirginia.us/2022/05/monday-news-breaking-climate-vows-would-be-monstrous-self-harm-the-buffalo-shooters-views-are-mainstream-on-the-right-democracy-is-at-stake-in-the-midterms-the#comment-5858726936 h/t @ParkerMolloy

What Is The Difference Between An Estate And A Trust?