From House Democratic Leader David Toscano…his last message of 2018, and as Leader (as of 1/1/19, Del. Eileen Filler-Corn will become Leader). Thanks to David Toscano for all his hard work the past few years as Leader; we accomplished a lot, but of course lots more to do (including taking back the majority in 2019)!

An Early Look at Budgetary Prospects for 2019

Perhaps the most important action we take as legislators is to pass a biennial budget. This is done in the even-numbered years and it is then modified in the next year. 2019 will be the year of budget modification. Gov. Northam recently presented his proposals for changes we can make in our two-year budget during our session beginning January 9, 2019. I was impressed by several developments:

1. The Virginia economy is booming. Unemployment now stands at 2.9% and our revenue forecast has improved dramatically. The state ended the fiscal year on June 20, 2018, with a surplus of approximately $550 million. Typically, surplus revenues are either saved for a future year or expended on one-time investments, such as buildings, roads, or other infrastructure.

2. The Commonwealth will likely have greater revenue in 2019 than originally projected. First, we are in position to take advantage of a court decision permitting the taxation of internet sales; this could generate another $145 million in general fund revenue, plus an additional $10 million for transportation improvements in Northern Virginia and Hampton Roads. Second, the Trump Tax Plan will have the effect of generating additional tax revenues for the Virginia budget. Projections on the amount vary, depending on the extent to which our efforts to refund some of these monies to taxpayers occur, but estimates range between $500-$600 million in additional monies for fiscal year 2019. 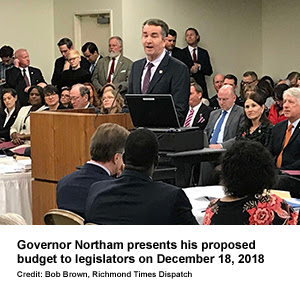 3. The Governor has proposed, and I support, providing some tax relief to those most impacted by the Trump Tax Plan and making targeted investments in critical initiatives to support all Virginians. The Governor has proposed about $200 million in tax relief. He has also proposed raises for public employees and teachers, $80 million in investments for school construction, $36 million to increase the number of mental health counselors in schools, almost $20 million for college affordability initiatives, $46 million to expand broadband in rural areas, and another $19 million in housing trust fund spending. In my view, these are prudent and necessary investments in services and infrastructure that our citizens need and desire. 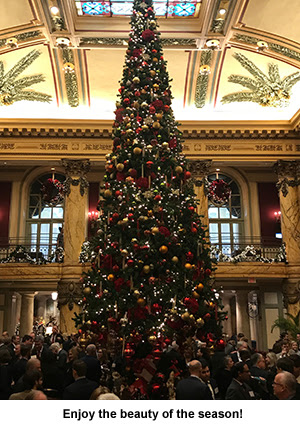 4. The Governor is also proposing to save some of the additional revenues in a reserve fund in the event that there is a downturn in the economy. You can see further highlights of the Governor’s proposal here.

Medicaid
We will have to account for a major increase in Medicaid spending for those who qualified for the program prior to expansion. The money supporting that expansion comes either from the federal government or from the provider assessment taxes imposed upon hospitals, but the increase in the budget is caused by an existing Medicaid population that is becoming older and sicker. We have adopted reforms that will hopefully cut costs, but have yet to see the results of these efforts.

Tax Cuts
When we arrive in Richmond in January, the budget debate will emerge as one of the most critical of the session. Some delegates would like to provide a larger tax cut that would impact not just middle- and low-income working Virginians as the Governor has suggested, but provide an additional benefit to wealthier taxpayers who have already taken advantage of the Trump Tax Plan. Please feel free to contact me with any views on this that you would like to share. 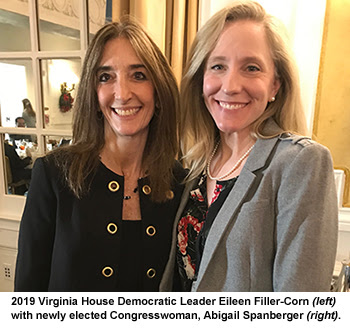 As this year comes to a close, I again wish to thank you and so many others in our community who have supported me for these many years. My role as the Democratic Leader comes to a close on December 31, 2018, and I leave it with a good feeling in my heart, largely generated by all the support you have given to me and my family. While I do not intend to cut back on my role as an advocate for the values we consider important, I am so happy to turn over the Leader position to my dear friend and colleague, Eileen Filler-Corn, shown here with one of our new Congresswomen, Abigail Spanberger. Eileen will do a terrific job as we solidify our gains and move towards the majority in the upcoming election cycle.

Nancy, Matthew and I wish you and yours the best for this holiday season and in the year ahead.