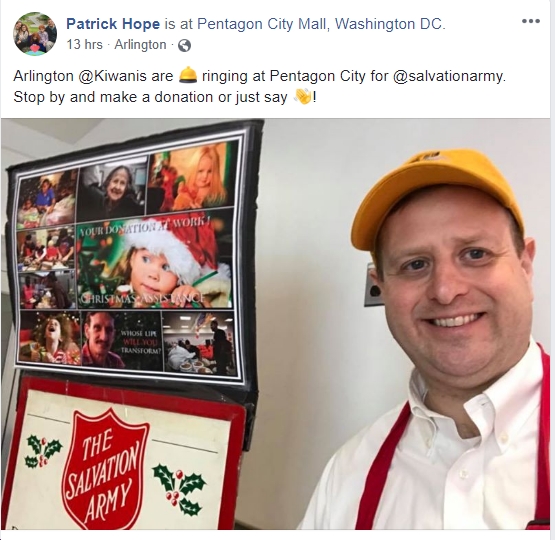 Over at Del. Patrick Hope (D-Arlington)’s Facebook page, a post on “ringing” with the Arlington Kinawis for the Salvation Army has sparked an intense discussion. I’m curious what Blue Virginia readers think, but first, here are a few of the comments from Del. Hope’s page. Personally, I commend Del. Hope for volunteering during the holiday season, for being a rock-solid legislator when it comes to human rights (including LGBT equality), for being a good person, etc., even while I am not a fan of the Salvation Army for the reasons expressed below and would recommend donating/volunteering to any number of great charities out there.

I know you’ve long been a strong support of LGBTQ equality, but I think you’re mistaken here. Back in the George W. Bush administration, the organization actually sought protections for their right to ignore local non-discrimination ordinances that protected based on sexual orientation. While they’ve made a strong effort since to give the impression that they’ve changed, they still have not adopted the same kinds of non-discrimination protections that you have for your own legislative staff and Governor Northam has for his administration.

If you want actual proof, here are just a few links to show the ongoing problem:

Until they are willing to say publicly the simple words: we will not discriminate on the basis of sexual orientation and gender identity/expression in our employment and in our services, I for one will be donating elsewhere and hope you will reconsider.

With a Second Trump Term, Thomas Jefferson’s “Wall Between Church and State” Could Very Well Crumble Into Shards