ultimately virtue is rewarded and

It doesn’t always occur and, if it does occur, it often takes a long time which is why it is heartening to see poetic justice occur even in only the most symbolic of ways.

The lottery for House offices provided just such a moment.

Representative-Elect Alexandria Ocasio-Cortez (D-NY14) is arguably among the most liberal (even legitimately Democratic Socialist) members of Blue Wave 2018. Climate Hawk Ocasio-Cortez is crashing into Congress, making more waves in policy (mounting attention to the #GreenNewDeal) and attracting far more attention than often occurs with Representatives a decade into their House careers.

Fox News Once Again Forgets That "Radical New Democratic Ideas" Are Really Popular: "Oh no! They discovered our vast conspiracy to take care of children & save the planet." @Ocasio2018 #MedicareForAll https://t.co/fMQFiqOit3 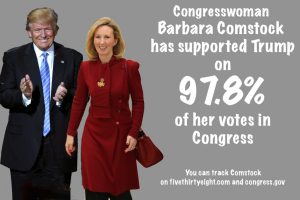 For those who fought long and hard to bring attention to how Barbara Comstock was masking extremism and fooling voters into thinking that she was some form of thoughtful moderate while voting to enable Donald Trump and working to inhibit any oversight into his (and his team’s) abuse of power, knowing that Rep. Ocasio-Cortez’s team will be working out of what once was a hotbed of skillful and deceptive Republican partisanship provides a nice reason for chuckling on this rainy Saturday.

PS: Btw, never realized that Comstock was ‘next door’ to Pelosi. Though, perhaps Ocasio-Cortez doesn’t realize that Representative Pelosi is (most likely) to move into the Speaker’s offices come January and thus they won’t be next-door neighbors when the Democratic majority takes control.

Freshmen Reps picked their offices today after the office lottery, and guess who @Ocasio2018 just realized is now two doors down from her: @NancyPelosi pic.twitter.com/mvHPNH2flE

NOTE: Of course, who really cares about who has what office? VA10 voters remain enthused that VA-10 will have real representation by a competent and thoughtful Representative Jennifer Wexton come January who will be willing to hear from and engage with all constituents even while upholding progressive values. Representative Wexton will, unlike Comstock, secure results for her constituents while resisting the excesses (and illegalities and …) of Donald Trump and ‘Team Trump’.