Amid increasing clarity that Brett Kavanaugh is a rabid partisan who has blatant disregard for legal obligations to tell the truth under oath, flavored in his early years with heavy alcohol (ab)use and credible accusations of multiple sexual assaults (while under the influence of that alcohol), Barbara Comstock’s decades-long collusion with Kavanaugh to undermine healthy and truthful public discourse has received far too little attention.

Part of a cabal that spread across Washington, in the 1990s Comstock “professionalized” GOP dirty tricks from within her staff position in Congress, driving investigation of Clinton, while Kavanaugh looked into whether President Bill Clinton had engaged in oral sex with Monica Lewinsky, while conspiring with Comstock on how to undermine the Clinton presidency. They were then — and since — incredibly effective in their jobs, doing damage to our democracy as they pursued conspiracy after conspiracy, pedaling whatever thread they could on gullible journalists in their efforts to take down the Clintons. And, they have cruised the same Republican uber-partisan circles in the decades since, as that 1990s cabal inserted itself into power positions throughout DC. The Kavanaugh-Comstock link hasn’t gone totally unremarked.

Last week, amid the increasing national focus on Dr. Christine Blasey Ford’s accusation that Brett Kavanaugh sexually assaulted her, journalists looked at the electoral implications of the allegation against Kavanaugh for supposed defender of women Comstock (who had strongly endorsed Kavanaugh for a Supreme Court seat and has been muted, at best, about the allegations against him and silent as to the GOP’s attacks on his accusers).

From The Boston Globe‘s story:

“Rhonda Stutzman, a piano teacher shopping for groceries amid the sprawl of this Washington suburb … accused Senate Republicans of having “blinders” on in their quest to push through Kavanaugh’s Supreme Court confirmation and expressed disappointment that her own congresswoman, Republican Barbara Comstock, had not stood up to them.”

And it is something undecided voters are keeping at the forefront of their minds.

“Of course it’s going to influence my decision,” said Marina Molnar, 39, a registered nurse who leans Democratic but has yet to make up her mind on the race. “I think it’s important how people react, with the allegation.”

Comstock previously made her advocacy on #MeToo issues central to her reelection argument, running ads touting her leadership. Asked Friday if she thought Ford was being treated appropriately, Comstock answered, “I’m not sure.”

In reading the Globe story, another thing jumps out: Barbara Comstock’s effectiveness in working the umpires (journalists) is quite impressive. For a person whose entire professional career has been as a rabid partisan attack dog (even if often behind the scenes); who voted for things like transvaginal ultrasound when in the Virginia House of Delegates; who is in lockstep with the NRA in opposing basic sensible gun regulation; who votes some 98 percent with the Trump agenda; these descriptions defy reality:

“Comstock, a relative moderate … has taken steps before to distance herself from the president.”

Again, voting for vaginal ultrasounds makes one only “a relative moderate” in comparison with abortion clinic bombers and voting >97% with Trump only is “distance … from the president” compared to Donald Trump, Jr.

.@RepComstock votes with Trump so much she makes the Tea Party look like a bunch of Swiss diplomats. 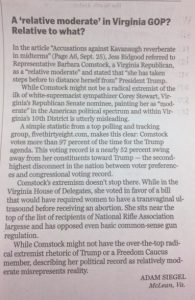 Sadly, far too many journalists over the years have been played by Comstock, masking her radical extremism with a seeming unending stream of smiling photo ops.

Notice to media:
Barbara Comstock is no moderate!

The Globe‘s erroneous labeling of extremist Comstock as “relatively moderate” begged for a response; a response that appeared in Monday’s edition.

In the article “Accusations against Kavanaugh reverberate in midterms” (Page A6, Sept. 25), Jess Bidgood referred to Representative Barbara Comstock, a Virginia Republican, as a “relative moderate” and stated that “she has taken steps before to distance herself from” President Trump.

While Comstock might not be a radical extremist of the ilk of white-supremacist sympathizer Corey Stewart, Virginia’s Republican Senate nominee, painting her as “moderate” in the American political spectrum and within Virginia’s 10th District is utterly misleading.

A simple statistic from a top polling and tracking group, fivethirtyeight.com, makes this clear: Comstock votes more than 97 percent of the time for the Trump agenda. This voting record is a nearly 52 percent swing away from her constituents toward Trump — the second-highest disconnect in the nation between voter preferences and congressional voting record.

Comstock’s extremism doesn’t stop there. While in the Virginia House of Delegates, she voted in favor of a bill that would have required women to have a transvaginal ultrasound before receiving an abortion. She sits near the top of the list of recipients of National Rifle Association largesse and has opposed even basic common-sense gun regulation.

While Comstock might not have the over-the-top radical extremist rhetoric of Trump or a Freedom Caucus member, describing her political record as relatively moderate misrepresents reality.

Due to her ability as a skillful, experienced political operative working the referees, extremist Comstock is too often misrepresented in media reporting as a “relative moderate.”  If the 10th CD’s voters really understood her extremism, were truly aware of her track record as a destructive political operative (as The Washington Post put it in 2001, “a kind of one woman wrecking ball“), Comstock would be down 20 points or more to Jennifer Wexton.  It is past time to help make our fellow citizens aware of the truth about Barbara Comstock’s extremist record.