Not surprising at all, but the good ol’ revolving door has indeed revolved…for former Rep. Barbara Comstock (R-VA10). Can we hear the sound of cashing in? Why yes we can – Ka ching! Ka ching! Just a reminder, by the way, that during Comstock’s illustrious career, she has been nothing else if not a “swamp creature.” For instance, see Right-Wing Operatives Form ‘Crisis Management Firm’ To Profit Off Scandal-Ridden Conservatives (back in 2006, “former Justice Department spokespersons Mark Corallo and Barbara Comstock are forming a law/PR firm — Corallo Comstock — to help defend Bush administration aides”); and also see Who Is Mark Corallo? Trump’s Former Legal Spokesperson Could Be The Key To The Russia Investigation (“After becoming a spokesman for George W. Bush chief of staff Karl Rove in ‘Plamegate,’ Corallo opened his own political consulting and crisis management firm, Corallo Comstock, with fellow political hand Barbara Comstock”), etc, etc. Also note that Comstock’s voting record in the Virginia House of Delegates and U.S. House of Representatives resulted in ratings that were basically 100% pro-corporate but godawful towards workers and the environment.

So clearly, Comstock is cut out to work for a firm like the one Comstock’s joining (Baker Donelson), which brags about having “decades of experience in the oil and gas industry.” Also worth noting, the company recently was sued over allegedly “help[ing] push investors to “confessed Ponzi schemer Arthur Lamar Adams and his disgraced company, Madison Timber Properties,” for having “allegedly abetted or turned a blind eye to Adams’ $100 million scheme.” So yeah, this should be a match made in heaven (hell?) in the latest episode of…”As the Washington, DC Revolving Door Revolves!” 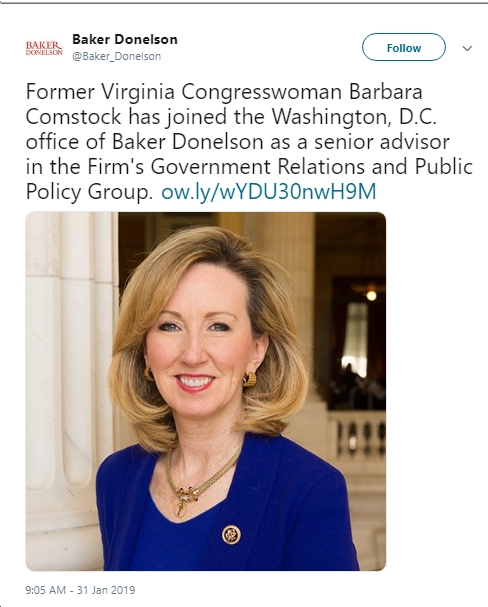