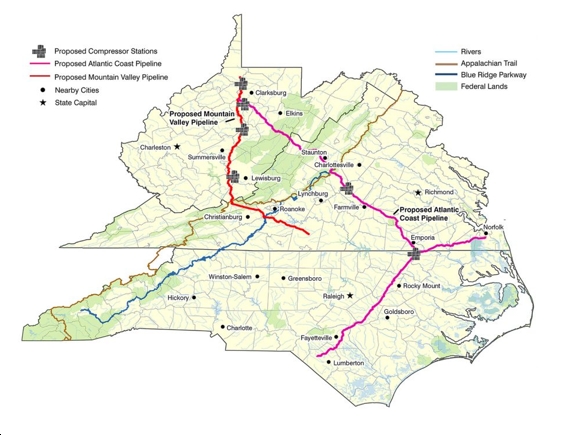 If you’re not a fan of environmentally destructive, economically nonsensical, fracked-gas pipelines from hell, you’re going to love this hot-off-the-presses ruling by the U.S. Court of Appeals for the Fourth Circuit. As reported by Argus Media:

The 4th US Circuit Court of Appeals, in a short order today, declined requests to reconsider its decision throwing out a key federal permit allowing the 1.4 Bcf/d (40mn m³/d) project to cut a path through two national forests and a major hiking trail. The order said no judges on the court had requested a poll on whether to grant a rehearing.

The decision marks a setback for pipeline developer Dominion Energy and others in the industry that worry the ruling could impede pipeline construction in the eastern US. Their concern centers on how the appeals court viewed the government’s management of land along the 2,200-mile Appalachian hiking trail.

Dominion Energy did not respond for comment. Company executives, on an earnings call earlier this month, repeatedly raised the possibility of appealing the decision to the US Supreme Court. This approach would increase project costs by $250mn, to $7.25bn-7.75bn, and delay completion of the project until the end of 2021, they said.

No doubt, this is a significant victory for those of us who oppose the Atlantic Coast Pipeline (ACP). Conversely, it is a significant loss for Dominion Energy, which had argued that the entire economy of the east coast would be threatened unless the court reversed its decision, and also that “the ruling by the three-judge panel to vacate the Forest Service permits went beyond the court’s authority and created an ‘impregnable barrier (from Georgia to Maine) dividing energy sources west of the (Appalachian) Trail from consumers east of the Trail.'”

Apparently, the 4th US Circuit Court of Appeals was not impressed with those arguments. Haha.

So what can Dominion and the ACP folks do now? My understanding is that one option would be to get the Supreme Court to hear it and reverse. Another could be what they tried and failed to do a few weeks ago – get Congress to override the decision. If not, they’re in deep trouble, because the bottom line is that you simply can’t run a pipeline from West Virginia to Norfolk without crossing the Appalachian Trail (check out the map, above, and click to enlarge). Plus, all these delays and needs to reroute the pipeline cost beaucoup bucks, and make the already absurd economics of this project even more laughable/bonkers.

With that, see below for the court’s ruling, which states:

P.S. This doesn’t seem like good news for the Mountain Valley Pipeline (MVP) either, since it also seeks to cross the Appalachian Trail (in the Jefferson National Forest) and since the MVP folks filed a “friend of the court” brief, in which the told the court that a decision against Dominion could likewise affect the MVP. Sad, huh?