So far, there are a bunch of Democratic primaries for Virginia House of Delegates, but very few against an incumbent Democratic delegate. In fact, according to VPAP, as of yesterday the only cases of that were: Andres Felipe Jimenez vs. Del. Kaye Kory in HD38, JD Spain vs. Del. Alfonso Lopez in HD49, Sally Hudson vs. Del. David Toscano in HD57, Monique Nicole Gatling vs. Del. Jeion Ward in HD92. Well, add another one to the list, as Republican-turned-Democrat Mark Wolfe – elected three times to the Manassas City Council, twice as a Republican and most recently (in 2016) as a Democrat – has just thrown his hat in the ring in HD50 (Prince William County, Manassas City; 58% Northam district). See below for video from Wolfe’s kickoff, and also a tweet from the incumbent he’s challenging – “Democratic Socialist” Del. Lee Carter, who declares, “The 2019 primary season has begun,” and who adds: “We’ve fought these last 2 years for a Virginia where everyone can live and work, free from worry about how they’ll put food on the table, or pay the rent, or see a doctor. It’s an uphill fight, but I’m confident the people of Manassas and Prince William want to keep fighting.”

In sum, Wolfe’s kickoff speech sounds like a classic Democratic, moderately progressive perspective to me. Which is basically where I’m at, ideologically (e.g., I do *not* consider myself to be a “Democratic Socialist”). So we’ll see how this one goes, but I’m definitely interested in Wolfe’s candidacy and am glad that there will be a choice for Democratic voters in this and other districts. Because as far as I’m concerned, primaries are where we fight it for the direction we want our party – and ultimately our state and our country – to go. Let the best candidate, with the best ideas, win!

P.S. A Twitter account called “PWCProgressives” responded to Wolfe’s announcement by tweeting, “Very upsetting @carterforva is being primaried by a LIFELONG republican who only recently became a a democrat. Who has hundreds of thousands of federal and state tax liens against him currently. This is an un-needed distraction.” Also, “Truly upsetting to see true progressive candidates challenged by the establishment. What do we truly stand for?” And also information about tax liens. 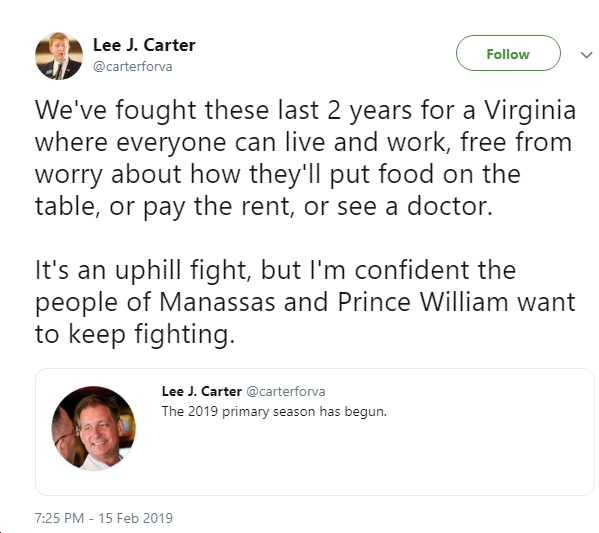 Audio: VA Sec. Public Safety Brian Moran Says Secret Recording “Unnerving" (Adds that murderer of police officer was definitely a "bad guy" in 1980, but in deciding about parole, "you have to at least include some of the stuff over the last 40 years") https://bluevirginia.us/2021/04/audio-va-secretary-of-public-safety-brian-moran-says-secret-recording-unnerving-but-reinforces-what-ive-been-saying-all-along