Thomas Jefferson must have been violently tossing around in his grave as he listened to yesterday’s debate in the Virginia State Senate on far-right State Senator Charles Carrico (R)’s bill SB1502, which “Requires local school boards to offer as an elective in grades nine through 12 with appropriate credits toward graduation a course on the Hebrew Scriptures/Old Testament of the Bible or the New Testament of the Bible or a combined course on both”). Recall that Thomas Jefferson in 1786 wrote the Virginia Statute for Religious Freedom, which stated that “no man shall be compelled to frequent or support any religious worship, place, or ministry whatsoever, nor shall be enforced, restrained, molested, or burthened in his body or goods.”

As you can see in the above video of the final minutes of debate on Carrico’s noxious bill, Sen. John Edwards (D-Roanoke) noted that there are many religions in the world, including numerous ones (e.g., Buddhism, Confucianism, Hinduism, Shintoism) that are not theistic, so Carrico’s bill singling out theistic religions for teaching in public schools  “really borders on being unconstitutional…in violation of Jefferson’s Statute for Religious Freedom in Virginia, but also the First Amendment.” Sen. Carrico then blathers on about why his bill supposedly isn’t unconstitutional, why “studying the Bible doesn’t mean that you’re [sanctuing? – sic] anything, why there are secular books (e.g., “Beloved,” “The Bluest Eyes”) that are “offensive,” why someone can put in a bill “next year for other religions,” blah blah blah. Sen. Janet Howell (D-Fairfax) stood up to ask Carrico one question. This is classic.

Sen. Howell – “I would ask the Senator, if we bring a bill next year for the Koran, will he vote for it?”

Sen. Carrico – “I would answer the gentlelady that no, I will not vote for it, just like she won’t vote for this one.” (hardy har har)

The bill then passed on a party-line vote, with the exception of Sen. Lionell Spruill (D), who is…well, see here for more on Spruill (who once said about a fellow Democrat named Wynne LeGrow – “this man is an atheist. Now, I’m not going to hell behind politics, I’ll tell you right now. I love Jesus, Randy Forbes loves Jesus, and I asked the man himself; he is an atheist and I will not take him to any Christian church…”).

P.S. And yes, Sen. Carrico is the same guy who literally walked out rather than listen to an opening prayer by a Muslim from the Dar Al Noor Islamic Center. No bigotry here, eh? 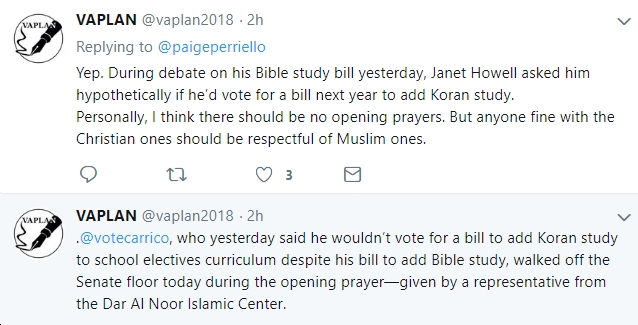