This morning on CNN’s State of the Union, former Gov. Terry McAuliffe – a strong Ralph Northam ally, arguably the person who more than anyone made sure that Northam would be the Democratic nominee for governor in 2017- had the following things to say about Northam. 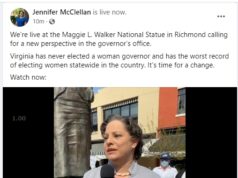