Did the Washington Post blow the Pam Northam “cotton samples” story? Did it succumb to the media’s desire for “clickbait?” According to Democratic Virginia State Sen. Chap Petersen (see screenshot, below), “What they reported re the First Lady singling out certain youths simply did not happen.” Sen. Petersen further adds that he has “talked to eyewitnesses,” and accuses the Washington Post of “character assassination.”

Now personally, I’m not a big fan of the corporate media, but I’m highly skeptical about the “character assassination” charge by Sen. Petersen – just doesn’t seem like something that Washington Post reporters would engage in. Also, given the utter tone-deafness (at the minimum) displayed by Ralph Northam regarding racism, the WaPo story doesn’t seem out of the realm of plausibility to me. On the other hand, the “cotton samples” story does seem very “clickbait-y” to me, and that’s DEFINITELY something the WaPo would do. So who knows. But regardless, it’s interesting that Sen. Petersen is out there this evening refuting the story and ripping the WaPo for its reporting on this. I wonder if Petersen is doing this on his own, or at the urging of folks in the Governor’s Mansion…

By the way, regarding Petersen’s point that “this is why people don’t trust the media,” in fact it’s overwhelmingly Republicans who don’t trust the media, while only around 25% of Democrats say they have “hardly any confidence at all” in the media. As for the Washington Post, it turns out that only a very small percentage of Democrats don’t trust their reporting, the exact inverse of Republicans, who mostly do *not* trust the WaPo. As for *why* Republicans don’t trust the corporate media, other than Fox and a few other right-wing sources, that’s because right wingers have demonized and delegitimized the so-called “liberal media” for years, not because of possibly erroneous, negative reports about Democrats. Personally, I have major problems with the corporate media, but those are due mainly to other issues – for instance, their relentless “both sides-ism” and false equivalency, their questionable choices of what to cover and what NOT to cover, etc. 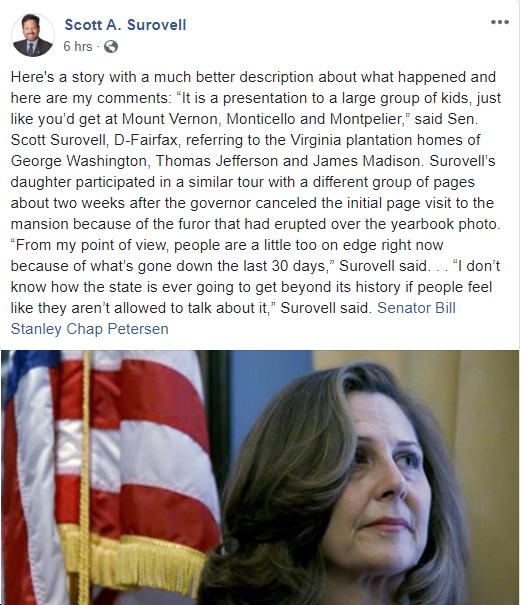 UPDATE Friday am: From the RTD:

In his daughter’s account, Stanley said, Mrs. Northam passed out the cotton boll to a page to pass around as a “hands-on experience,” a technique she uses regularly as a teacher.

“Every page looked at it, every page held it and touched it, how painful it must have been in the context of slavery,” he said.

Stanley said his daughter acknowledged some pages did not like it.
His wife, Laura, took a similar tour two days later after a luncheon for legislative spouses at the Executive Mansion.

The speaker for the luncheon was Gayle Jessup White, community engagement officer at Monticello, President Thomas Jefferson’s home in Albemarle County. She is an African-American descendant of Jefferson and Sally Hemings, a slave with whom he fathered several children.

“My wife said it was very poignant, powerful and compelling presentation,” Stanley said.

Monday News: “Historic deal struck to halt biodiversity loss by 2030”; “The evidence is overwhelming that Donald Trump has to face his reckoning”; “Twitter...