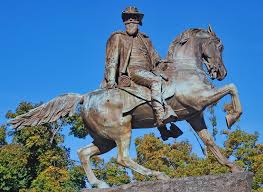 There is a dark place in the recesses of Virginia that we dare not acknowledge. It was established at the inception of this nation and formed alongside our democracy.  For some, it is equally sacred.  Much was sacrificed for this place. The blood, hope and dignity of my ancestors watered this place. Their pain was counted as a casualty of privilege, necessary for the exaltation of some.  In this place lies the stereotypes that cement an institution and evoke a visceral response.  Some even worship at its altars and call it history. I call this place the denial of our collective humanity.

This is the place that the controversy surrounding Virginia’s Governor forced us to visit. With the publication of the photos of two young men – one in black face and the other in a KKK costume – this place of our nation’s shame was exposed again. Cries of outrage have rightly risen.  Many have demanded retribution and his resignation.  Others have asked if we can remember the Ralph Northam who has been a friend.  What should not be lost is that this is a moment of reckoning. We stand here because time and time again, we as a state and even as a nation have tried to will our past away.  Despite our best efforts, we have yet to collectively call these atrocities that arose from an often celebrated seat of the Confederacy the stain on our democracy that they are.

The reality is that this isn’t really about Ralph Northam. It is about our repeated inability to really deal with our past. That is a past that many embrace and speak of with fondness referencing the glory of the Old South, perhaps hoping it will remain undisturbed.

The problem today is that we need to realize that the complete history has not been told. And in not telling that whole story, we have allowed a false narrative to occupy space designed for truth that would build integrity and respect for all. During the month of February, the shortest month of the year, we pay homage and celebrate Black History month.  For the most part, American students have not been told that people of African descent contributed to the founding of this nation or that their ancestors came from a continent rich in resources, advanced cultures and loving families. Many have not heard of such American heroes as Patriot Crispus Attucks, one of the first to die in the Revolutionary War; Benjamin Banneker, an early Architect of our nation’s capital; Phyllis Wheatley, one of the best known early American poets; and scientist Charles Drew, who laid the groundwork for the storage and processing of blood for transfusions.  There are many such African- Americans who have enriched and contributed to the success of our nation, and they should be presented as great Americans.  Until we recognize this place where the full truth has not been told, the systemic oppression that lingers from it, cannot be destroyed.

Irrespective of what happens in the next few days, it’s my hope that we face these issues head on. Let’s tell all our children about the value of every hand that has contributed to the building of this nation, our melting pot.  Let us do more than call for the resignation of one individual we consider complicit and earnestly examine the history of this state. The response to this debacle should bring us all to the table to gain a real understanding of what this past means, how our children have been impacted, how the cycle cannot continue and how we tell the truth from here forward. Let us come together to build once again, but this time I pray we recognize that the weed growing alongside our democracy will not die until we all tend our garden.

Despite Important Legislative Work on Policing Reform in 2020 and 2021, the Windsor Police Stop of Army Lt. Nazario Shows We Have More Work...