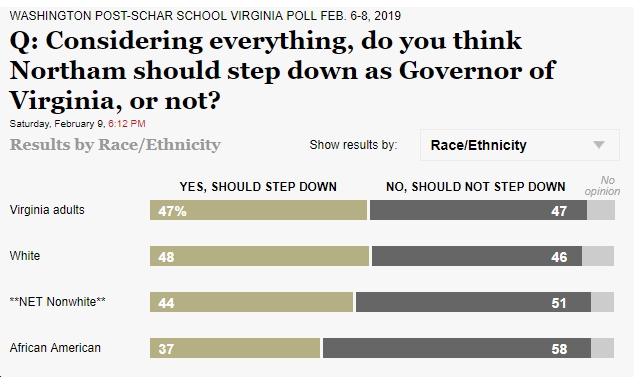 There’s an interesting new poll by the Washington Post and GMU’s Schar School of Policy and Government out this evening. For the full results, see here. Also, see below for some highlights that jumped out at me.

Bottom lines: 1) It looks like Ralph Northam actually has a significant amount of support, particularly among Democrats and African Americans, with a solid majority in both those groups NOT wanting Northam to step down; 2) there’s minimal interest in seeing Mark Herring step down as AG; 3) Justin Fairfax was already in trouble BEFORE the news broke last night about an alleged rape at Duke University; 4) there are major racial and partisan divisions regarding whether or not (I’d argue emphatically NOT) Virginia has ” done enough to address the history of racial discrimination against blacks in Virginia.”

P.S. Ralph Northam is vowing to stay in office, and to use his position to “pursue racial reconciliation” (he “said he has asked his Cabinet secretaries to come up with specific proposals to begin addressing issues of inequality, such as expanding access to health care, housing and transportation, and to begin reporting suggestions on Monday”). I mean, since it looks like he’s staying put, I’d say if Northam really wants to focus on racial equity and healing, maybe some good can come out of this whole sorry affair? 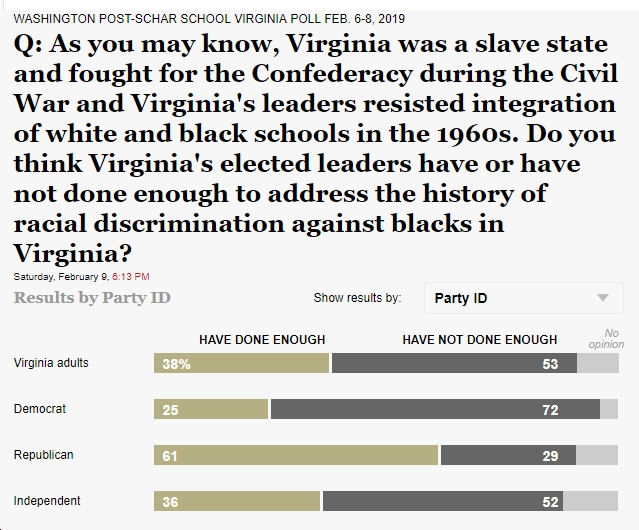