Great stuff from Rep. Jennifer Wexton (D-VA10), who has been a leader on LGBTQ equality and full protection under the law.

Early this year, I made the decision to hang the transgender flag in front of my office.

This was meant to be a small and simple gesture of solidarity.

But, overnight, my office was flooded with messages of gratitude. The flag hanging outside of my office had gone viral. Folks from all over called, emailed, wrote—and DMed—my office to thank me for doing it.

I was touched by how much this small demonstration of solidarity meant to so many.

But today, I’m proud to speak in support of real, substantive legislation that will be transformative for millions of Americans.

The Equality Act is a bipartisan bill that will provide comprehensive, federal nondiscrimination protections for LGBTQ individuals in employment, housing, credit, education, and much more.

Today, you can marry the person you love Sunday, and wake up Monday, fired from your job. It’s not right, but the Equality Act can fix that.

To my colleagues, let’s extend the full promise of this nation to every LGBTQ American. Let’s pass the Equality Act now. 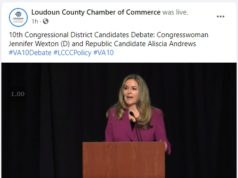 Biden just hit 96% chance to win the election in The Economist model. So much for the race tightening (if you include right-wing propaganda like Rasmussen?)... https://bluevirginia.us/2020/10/monday-news-republicans-closely-resemble-autocratic-parties-in-hungary-and-turkey-trump-team-just-announced-its-surrender-to-the-pandemic-barrett-confirmation-highlights-gop-minority-rule#comment-5126039920

Among the crazy things said at the Freitas extremist rally yesterday was "Doctor" (LOL) Rand Paul's idiocy about masks. Thanks to @RepDonBeyer for calling him out. https://bluevirginia.us/2020/10/video-photos-from-the-republican-rally-with-far-right-ted-cruz-rand-paul-amanda-chase-nick-freitas-daniel-gade-kirk-cox-etc#comment-5125946882