In an increasingly “blue” Fairfax County, you’d think that the few remaining Republicans holding elective office in the county might want to tone things down a bit, move away from the far right and towards the center, etc.  But…nope.  At least not in the case of Supervisor Pat Herrity (R-Springfield District), who is facing a tough challenge from Democrat Linda Sperling, and for whom the answer is instead to double down on the hard-right, xenophobic crap.

For instance, check out the short audio clip, below, of Herrity’s appearance on right-wing talk radio (WMAL) a couple days ago, in which he wildly misstates the amount of money going to Fairfax County’s proposed $200,000 investment (note: that is an infinitesimally small part of Fairfax County’s $4.4 BILLION budget) in a pilot program for a legal defense fund for county residents dealing with deportation proceedings.  In his interview, Herrity states not once but twice that the amount of money is $200 MILLION (overstating it by a factor of 1,000), before finally correcting the error, then instead of apologizing and signing off the air, continuing with his idiotic and dishonest talking points about how this supposedly enormous (not!) amount of money will take funds away from other important priorities. Which, of course, it won’t.

P.S. Herrity’s also fundraising off of this anti-immigrant, xenophobic crap via Facebook ads. See screenshot, below the audio. 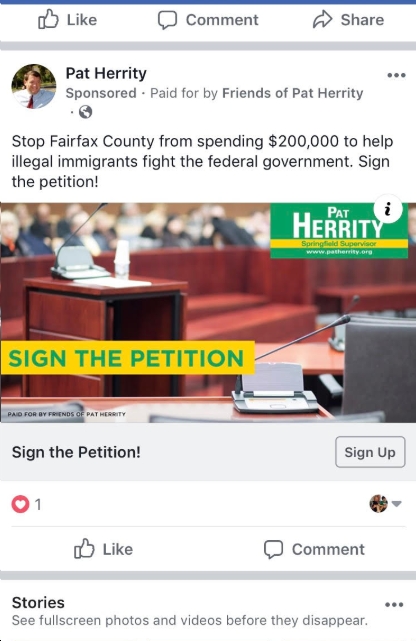