As you’re aware, this November, Fairfax County will select a new Chairman of the Board of Supervisors, replacing current Chair Sharon Bulova, who is retiring. Currently, there are four Democrats – Alicia Plerhoples, Jeff McKay, Ryan McElveen, Tim Chapman – running for this position, as well as one Republican – Joe Galdo, who announced Tuesday evening at the monthly Fairfax County Republican Committee meeting. See below for an excerpt from his speech, which among other things: 1) falsely and ridiculously refers to Family Life Education in public schools as “radical indoctrination”; 2) absurdly claims that Fairfax County, which is one of the safest jurisdictions around (with a crime rate 69% below the national average) needs to be made “safe again” (dude, it already is!); and 3) apes Donald Trump’s hateful #MAGA sloganeering, specifically vowing to “make Fairfax great again.” 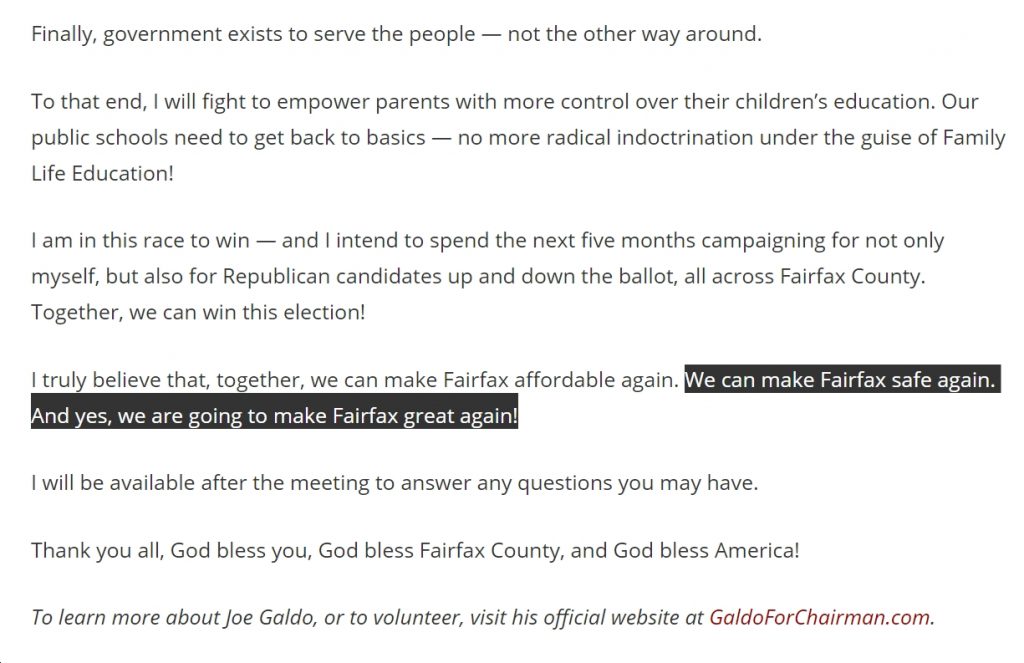 Crazy shit, yeah. And it deserves a strong response. Which, fortunately, we got from Alicia Plerhoples, in the following, powerful video. According to Plerhoples – and she’s 100% right, by the way – that “this announcement was unusual in the fact that the candidate announced that he wants to make Fairfax great again….using Trump’s MAGA words essentially…I’ll tell you that what those words mean for a black or brown person like me; those words are hateful, filled with bigotry, divisive, and I can’t believe that they’re used in Fairfax County.”

Well said, exactly right, and all the more reason for Democrats to turn out in droves this November to sweep Trump Republicans out of office, up and down the ballot in Fairfax and all across in Virginia!