What has been a relatively sedate contest for Commonwealth’s Attorney in Arlington/Falls Church ratcheted up the volume a few notches this morning. On its Facebook page a couple hours ago, the Arlington Police Beneficiary Association posted a joint statement with the Arlington Coalition of Police, stating:

“Arlington Commonwealth’s Attorney candidate Parisa Dehghani-Tafti is falsely accusing an ACPD officer of police brutality. She should be ashamed and owes that officer and all the men and women of the Department an apology.”

What prompted this, apparently, was a mailer from the Tafti campaign/”Justice and Public Safety PAC” (see screen shot, below, and click to enlarge), which went after incumbent Commonwealth’s Attorney Theo Stamos for having “Refused to prosecute police officers in cases of brutality.” One of the cases they footnote was reported by the Washington Post in May 2015. According to the WaPo:

The disturbance led Arlington officers to the Gates of Ballston complex, where around 11 a.m. they encountered the son in his residence, police said. One officer received a serious gash across his face, a second was Tasered, the mother suffered minor injuries, and Alfredo Rials-Torres, 54, was shot in the chest by police.

Police have not described how the encounter unfolded. Rials-Torres was pronounced dead at Virginia Hospital Center shortly after.

“I heard three shots,” said Reyna Duarte, who lives in a neighboring building. “They brought the guy out, bleeding from his chest.”

Police spokesman Dustin Sternbeck said that the officer who had been cut was in surgery Tuesday afternoon but that his injuries were not life-threatening.

The incident in question involved an officer who shot a 54-year-old man three times on May 19, 2015, during a domestic violence call, after the man struck the officer in the face with a metal bar.

An investigation into the incident ruled that the deadly force was justified, and cleared the officer of criminal charges.

Now, of course, we know there have been numerous incidents of police brutality in this country. But Arlington County’s police department has a superb reputation for professionalism, does a great job from everything I’ve heard and observed over the years. Also, based on the reports on this incident, plus the investigation which found that the officer in this case “‘acted consistent with ACPD policies governing use of force’ and his actions were ‘justifiable and necessary to defend himself and others present,'” this one doesn’t at all sound like police brutality to me. To the contrary.

Politically speaking, we’ll see how this plays out – including how the Tafti campaign responds –  but clearly this mailer has not pleased Arlington County police, to put it mildly, which probably makes them doubly motivated to defeat Tafti and reelect Stamos on June 11. Stay tuned…

P.S. I like and respect both Parisa Tafti and Theo Stamos, and am undecided who I’m going to vote for on June 11, but I’m not a fan of this specific accusation against the Arlington County Police, as it doesn’t seem at all warranted. 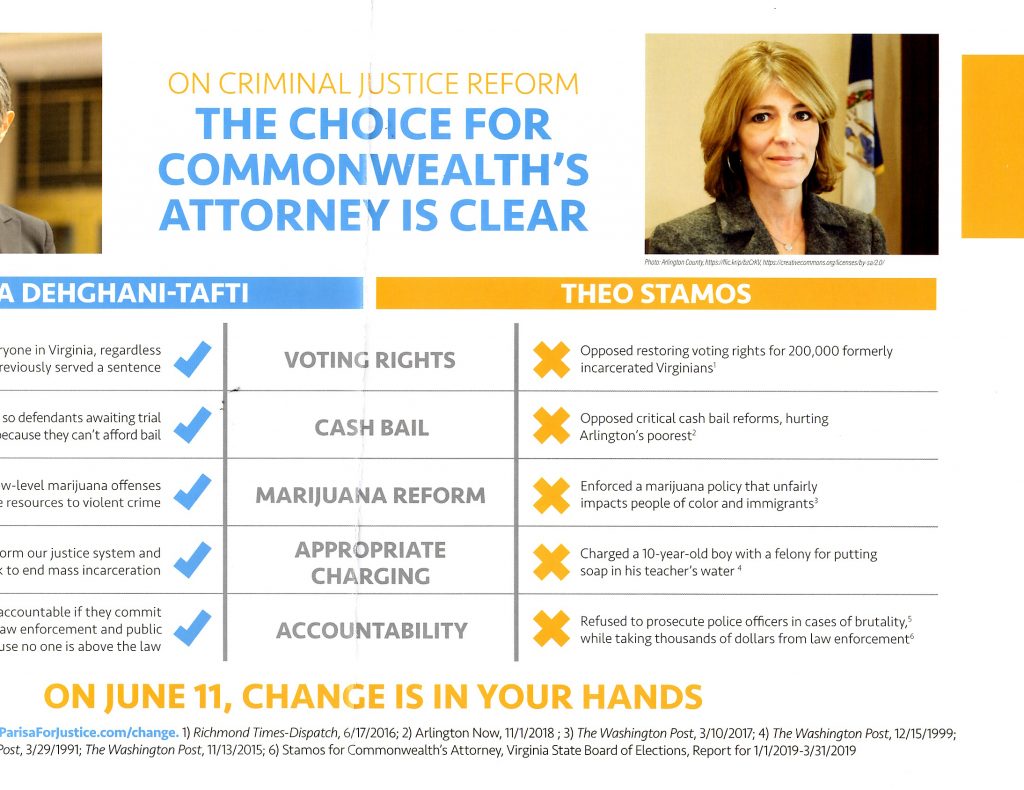 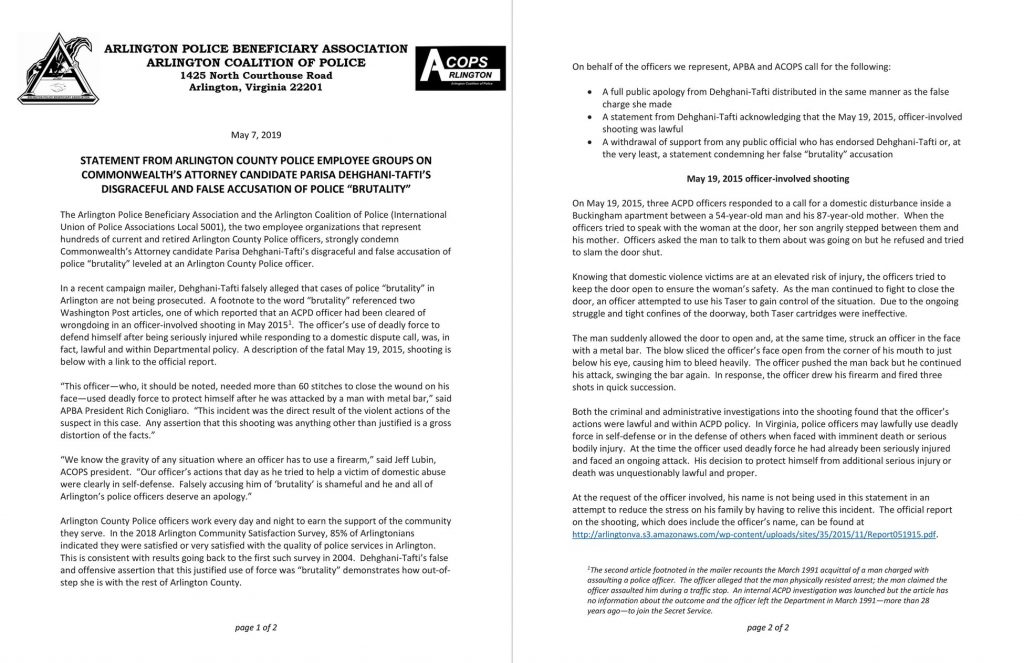 UPDATE 12 pm – See below for a statement from the Tafti campaign.

“As I have spoken to voters throughout the course of this campaign, it is clear that they want accountability, transparency, and impartiality from all of us responsible for the administration of criminal justice, including the Commonwealth Attorney’s office.  What was not mentioned in the police statement was that the mother of the victim said he was schizophrenic and possibly off his medications, and that he did not initiate any violence. The mother only spoke Spanish, and the police could not communicate with her.  The medical examiner determined her son was killed by a shot to his back.  This is the exact fear I have heard from parents of children with serious mental illness and members of our immigrant community throughout Arlington and the City of Falls Church, and is a prime example of why we need a criminal justice reformer in our Commonwealth’s Attorney’s office.
In a case not mentioned by the APBA and the ACP, the current Commonwealth’s Attorney prosecuted a case against a man who was the victim of an assault by a police officer during a traffic stop.  In ruling that the man had not provoked the assault by the officer by assaulting him first,  the judge said “I hold police officers to a higher standard.”  Voters have told me time and again that they want a Commonwealth’s Atttorney they can trust to be impartial and hold everyone accountable.  Seventy-two percent of Virginians say they want criminal justice reform, but it has become a standard trope that those opposed to reform accuse reform candidates of being anti-police.  I am not anti-police, but pro-accountability and pro-community.”
There's no paywall on Blue Virginia, and we definitely want to keep it that way! If you want to help support our work, you can donate here - thanks! Also, you can sign up for our weekly email list here.