Virginia’s history with mental health care is checkered at best. While we can boast of having the first public hospital designed exclusively for patients with mental illness, our Commonwealth also played host to a system of psychiatric hospitals that were infamous for its role in the American eugenics movement. Fast forward to now and the situation has changed dramatically. In 2019, mental health care is politically fraught – legislators are either limited by bureaucratic agendas or just silenced by apathy. Virginia can’t afford to be limited or silenced anymore.

Since May is Mental Health Awareness month, this is the perfect time to draw attention to this important topic. Mental health issues will impact 1 in 5 people during the course of their lifetime. Even with these staggering numbers, though, we all too easily dismiss these health concerns. It’s much easier to discuss a physical ailment, like an appendectomy or a broken leg, but we need to break the stigma of mental illness. That’s why I’m running for the House of Delegates in District 26, to open up the conversation to all Virginians. Only when we can share our stories of mental illness can we work together to make demonstrable change.

In April 2012, I gave birth to a healthy and wonderful little boy. During the rest of that year and into the next, I grew increasingly anxious, fearful, hopeless, and depressed; I lost my appetite and severe fatigue settled on me like an ever-present fog. Though my son was a joy and my husband such a help, though I grew a circle of supportive friends and had a strong connection to my family, postpartum depression overtook me. And it wasn’t my fault, though my ever-present guilt kept insisting it was. I remember holding my smiling baby boy, tears rolling down my face, and praying that God would kill me. I remember thinking that everyone around me would be happier if I simply disappeared.

When I shared my story with neighbors and friends, they were shocked. People don’t talk about this. People don’t make themselves vulnerable like this. That silence needs to change. I’m running for the House of Delegates because I know what it is to feel locked inside yourself. And I don’t want to be scared anymore. I was able to get the help I needed; it took time, counseling, medication, and strength to overcome postpartum depression. And once the fog had lifted, I decided to run for the House of Delegates because I knew my story could inspire conversation and motivate change. And my community members have confided in me too, about their struggles, their inability to find resources, their frustration with the system. That’s what continues to drive my devotion to run and to win –- so that I can give voice to those suffering and so that I can actively improve the resources we devote to mental healthcare.

My experience is not unique – not by a long shot. The number one complication for childbirth is postpartum depression. It’s estimated that 1 in 9 women suffer from postpartum depression. Midwifes, nurses, OB-GYNs, and pediatricians all know that it’s a pervasive problem. In my part of the Shenandoah Valley, practitioners, working with Postpartum Support Virginia, have formed the Shenandoah Maternal Mental Health Coalition, a group designed to recognize and take action on this critical issue. In collaboration with a grassroots group, Women of the 26th, my campaign hosted a Mental Health Forum this past weekend, where we heard from practitioners, parents, and concerned citizens, all eager to learn, collaborate, and create actionable ideas to take to all levels of government.

That kind of engagement is essential because the United States is the only developed country where maternal mortality rates are increasing. And, if you are a black woman, you’re three to four times more likely to die in childbirth. That’s unacceptable. As a member of the General Assembly, I’ll argue for and work to deliver funding specific to maternal mental health, so that we can develop local programs to provide nurses and community care for new mothers. We need to support new mothers in a substantial way, putting Virginia at the vanguard of social change.

We need to address mental health care and other issues that require social change early and often. Our education system offers the perfect opportunity to address trauma and to immediately offer resources. During the 2019 General Assembly session, the press focused on the need to reduce the counselor:student ratio. The General Assembly passed a bill to reduce the ratio to 1:455 for grade school, 1:370 for middle school, and 1:325 for high school, which is far greater than the ratio suggested by the American School Counselor Association of 1:250. To ensure our children are receiving the services they so desperately need, counselors need to work with smaller numbers of students, allowing each child to receive the attention and care they deserve. In addition, we need to increase the number of school psychologists and social workers within our school systems, preventing them from being stretched too thin. In Rockingham County Public Schools, every school psychologist covers four schools which, due to our rural location, can involve some serious travel time as they drive from site to site. Time that could be spent with students is spent in the car, and they don’t get to offer professional training for teachers or facilitate special education beyond basic testing. We can do better.

While this past General Assembly session saw some legislative change happen in the Commonwealth, we tend to be reactive, not proactive. Our lawmakers wait until something catastrophic happens. Then they’re spurred to action. The massacre at Virginia Tech prompted a reform of the emergency evaluation process, but more work still needs to be done. Something that Senator Creigh Deeds has noticed is that in systems that are strapped for resources, rural areas experience that lack of resources the most acutely. When the state cuts the budget, these localities are the first to feel the pinch, with mental health care often being the first to go. As a fellow rural Democrat, I’m ready to dig in and fight for House District 26’s priorities.

Mental health issues don’t just happen to new mothers and within schools, but those are two ways to make sure my community of HD26 is being heard. As a General Assembly member, I’ll acknowledge workplace and SOL test anxiety, provide avenues for addiction to be treated with dignity, work to implement gun safety programs and gun violence prevention programs, and guarantee more beds and facilities for those who are mentally ill. Older and younger generations alike deal with these issues. Helping people find the resources they need, easing their fears – those will always be top legislative priorities to me.

Virginia has the resources to be a leader in acknowledging and treating mental illness. With the right people leading the charge to stomp out the stigma, we can make a difference.

Eliminating the stigma of mental illness is too important to leave to chance (or the voting record of a Republican-majority General Assembly). As a college Writing & Rhetoric instructor, I have the ability to design, write, and promote the large number of bills needed to move this conversation forward. Comprehensive mental health care reform will take commitment, and I have the ability and experience to bring substantial change to Virginia. Together we can shake off Virginia’s checkered past and move the Commonwealth into the 21st century.

Cathy Copeland is a candidate for the House of Delegates in District 26 (Harrisonburg and Rockingham County). She has been endorsed by Run For Something and teaches at James Madison University. 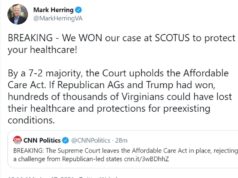 SEIU Endorses AG Mark Herring for Reelection (“The hard work of our brothers and sisters in labor is the foundation of a strong economy and a prosperous Virginia.”) https://bluevirginia.us/2021/06/seiu-endorses-ag-mark-herring-for-reelection