With just 12 days to go until Virginia Democrats head to the polls to choose our nominees, I think it’s time to weigh in on a big one: the Fairfax County Board Chair Democratic primary between Supervisor Jeff McKay, Georgetown Law Professor Alicia Plerhoples, School Board member Ryan McElveen and affordable housing developer Tim Chpaman. Nothing against the other three candidates – and obviously, vote for whoever you think is best – but ultimately my pick in this one is Alicia Plerhoples, for the following reasons. 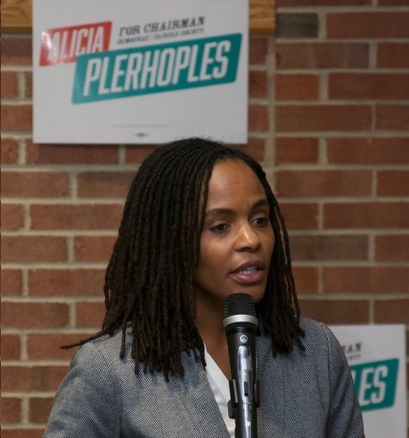 First off, I’ll refer everyone back to Blue Virginia “front pager” Adam Siegel’s well-reasoned endorsement of Plerhpoles, given that he and I are almost exactly on the same page on this one. In short, while I think that “establishment” favorite Jeff McKay is a good guy and would be a solid Chair, I agree with Adam Siegel that nominating Plerhoples would have the following advantages:

a) Send the right message at the right time, specifically in the aftermath of the Ralph Northam (“blackface”/KKK photos) and Justin Fairfax (credible allegations of sexual assault by two women), regarding “the role of women and people of color as leaders of the Democratic Party and of the Commonwealth of Virginia”
b) “Leverage grassroots activism into political leadership, providing a new path for openness and engagement between Fairfax County’s citizens and its government”
c) “Show that Fairfax County voters believe that the county (and its government) is falling short of what it can and should be for its citizens across critical arenas (equity, environmental, …)”
d) “Put a thoughtful, passionate, inquisitive, ethical, and highly competent person” – I’d add progressive and environmentalist – in charge of Fairfax County’s Board of Supervisors.

I’ve also got to say, the Washington Post really pissed me off with its not-at-all-subtle sexism (“there are no women with young children on the Board of Supervisors…because ‘there are late night meetings, and it’s hard work’) and its all-male endorsements for Fairfax County Board of Supervisors. That yet again drove home to me how pervasive, insidious, and damaging these types of attitudes are, and how they have to be fought – not just by women, but (even more so?) by MEN.

Again, none of this necessarily means that there’s anything wrong with the male candidates for Fairfax County Board Chair. Again, I think that Jeff McKay is a good guy who will likely do a fine job as Chair if he wins, as many expect him to do.  But I also think that it would be a great time to send a message about Democratic values, in this case by nominating a highly impressive progressive, environmentalist and woman of color, Alicia Plerhoples.

By the way, I had a chance to sit down and talk at length with Alicia Plerhoples a few months ago, and have never forgotten how impressed I was with her intellect, accomplishments, progressive and environmental views. I remember walking out of that meeting thinking that I had just met a potential rising star in Virginia politics. Nominating Alicia Plerhoples on June 11 to be Chairman of the largest county (1.2 million people) in Virginia would certainly confirm my gut feeling a few months ago. I encourage everyone to do just that.

Video: “These are the types of deplorables that Governor Youngkin will attempt to stack our School Boards with. Beware.”