I’m not disputing that the Washington Post’s endorsed candidates for Fairfax County Board of Supervisors (James Walkinshaw in Braddock District, Rodney Lusk in Lee District, Walter Alcorn in Hunter Mill District, Phil Niedzelski-Eichner in Providence District, Jeff McKay for Chair) are all well qualified. However…it *is* striking that as we’re seeing – and for good reasons – a surge in female candidates here in Virginia and across the country, the WaPo’s editorial page (ok, yeah, it’s basically one guy, Lee Hockstader) decided to endorse an all-male slate in the Fairfax County Board of Supervisors’ Democratic primaries on June 11 (just two weeks from now).

But even leaving that aside, the reported comments made by Hockstader et al to two of the female candidates – assuming Alicia Plerhoples’ and Larysa Kautz’s accounts are accurate (and I have no reason to doubt that they are) – are simply appalling. Check it out:

I mean, this is just beyond parody. Can someone remind me, are we living in 2019 or 1919 or what?  Is the WaPo seriously ok with this type of attitude and language directed at female candidates – both of whom (Plerhoples and Kautz), by the way, are VERY impressive and would do an EXCELLENT job! Truly appalling if so.

P.S. Note that at least one WaPo-endorsed *male* candidate has young kids. Wonder if they asked/lectured *him* about that. Nah! 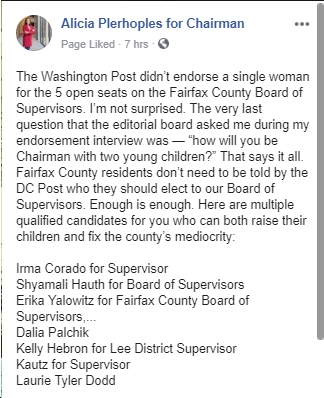