Is there anyone out there who still likes neo-Confederate extremist Corey “I Was Trump Before Trump Was Trump” Stewart, the Prince William County Board Chair, climate science denier, neo-Confederate, etc. who got clobbered by Sen. Tim Kaine 2018, then was tapped to head up a pro-Trump PAC (“Keeping America Great”)? I don’t know, but the list of Corey fans sure seems to be getting smaller and smaller based on news headlines the past day or so. 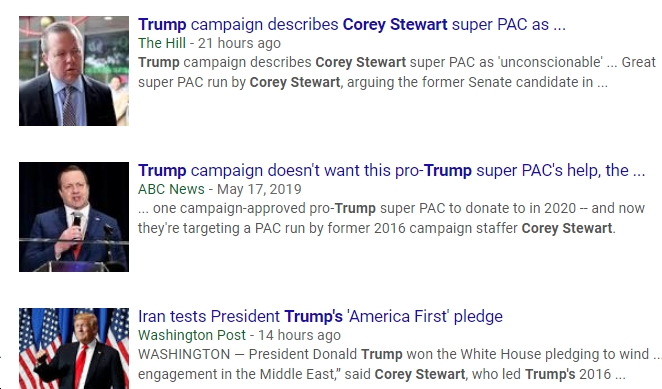 That first article, for instance, reports:

President Trump‘s reelection campaign is disavowing a Keeping America Great super PAC run by Corey Stewart, arguing the former Senate candidate in Virginia is trying to trick people into thinking they are supporting Trump by giving money to his PAC.

Trump campaign spokeswoman Erin Perrine in an interview with ABC News accused Stewart’s group of trying to get people to think “they are directly supporting the President’s reelection” by giving to the PAC.

She called the behavior “unconscionable.”

Yeah, well, we’ve always known Corey to be “unconscionable,” starting back in 2007, with his crusade against Latino immigrants (see Washington Post on Prince William County “Hounding Immigrants” and Hilda Barg Slams Corey Stewart for Attacking Chief Deane, for instance). Then, we watched his disgusting campaign for U.S. Senate last year, which he pledged would be “vicious” and “ruthless,” not to mention climate-science-denying, white-supremacy-embracing, etc.

As for the ABC story, it quotes Corey Stewart whining about how “controlling” the Trump campaign is, how they “want to control everything,” and how he feels like an “abused dog  who keeps getting kicked trying to help the president out.” Kinda like when he was fired by the Trump campaign as Virginia state director in 2016 for insubordination, basically, and also for being completely incompetent.

Finally, check out today’s Washington Post story, in which Corey bites back to Trump: “It does concern me that the president has (national security adviser John) Bolton and a lot of these neocons advising him. That’s clearly not what he ran on and what most Americans want.”

In sum, Corey Stewart might think he’s Trump before Trump was Trump (whatever that means), but Trump apparently doesn’t think Corey is Trump – before, during, or after Trump was Trump. Got that? Yeah, the (admittedly one-sided) love affair appears to be over…if said love affair ever existed in the first place, other than in neo-Confederate Corey’s strange, strange, “unconscionable” mind.