It’s primary election season in Virginia, and while we’ve mostly focused on Democratic primaries, we also have highlighted some of the insanity going on with our Republican counterparts. For the latest installment, let’s turn our attention briefly to a Republican primary contest in the Shenandoah Valley between a relatively normal conservative Republican and a full-on, far-right nutjob.

Specifically, I’m referring to the GOP nomination fight – and yes indeed, it’s a fight! – in the 24th Senate District (stretching from Staunton and Waynesboro eastward to Culpeper County).  In this deep-red (62% Corey Stewart!) district, long-time incumbent State Senator Emmett Hanger is being challenged by rabidly right-wing Tina Freitas – wife of the equally rabid Nick Freitas (the guy who couldn’t beat neo-Confederate Corey Stewart in the June 2018 Republican primary for the U.S. Senate nomination). The basis for Freitas’ challenge, as far as I can tell, is that she’s really *really* mad that Hanger voted to bring Virginians’ tax money back home and to provide health care to people in his district who badly need it (aka, “Medicaid expansion,” which tons of other Republicans supported as well). Horrible, ain’t it?

So yeah, if there’s any justice in the world, Hanger will win this race easily. Although frankly, a large part of me really doesn’t care who wins this one, starting with the fact that Democrats have zero chance of winning here in November, and continuing on to the fact that, although Emmett Hanger is less bat****-crazy than Tina Freitas, his interest group ratings are still very bad.

Also, frankly if Freitas wins, it will undoubtedly provide Democrats (and pro-Democratic bloggers – ahem) with a continuing stream of great material to use against Republicans. On the other hand, it’s no doubt disturbing to see the once-sane Republican Party lurch further and further to the extreme right. The fact is, I’m a Democrat, but I’m also a Virginian and an American, and I strongly believe that our state and country really could use two normal, sane parties, one center-left and the other center-right. Instead, what we currently have are one center or maybe center-left party (the Democrats) and one far-right/outlier party (the Republicans). And that’s not a healthy state of affairs.

In this case, if Emmett Hanger wins, the Virginia Senate will at least maintain a relatively normal/sane conservative voice in a caucus that continues to careen to the hard right. Obviously, I disagree with Hanger on any number of issues – gun violence prevention, a woman’s right to make her own health care decisions, etc, etc. – but at least he supported Medicaid expansion, and over the years, budgets to provide new funding for transportation and education.

Tina Freitas, on the other hand, is about as far right as it gets. Exhibit A in her clown show of a campaign is a nonsensical, offensive, insane statement she recently made comparing efforts to restrict abortion to the work of abolitionists trying to free slaves in the 1800s. WTF?

BTW, it’s kind of ironic given that Freitas has now apparently gone full #MAGA, but back in 2016, Freitas took to Facebook (see screen shot, below) to dismiss then-candidate Trump as a “filthy old man” and “the second lest conservative, most morally bankrupt ‘Republican’ candidate in the field” after the infamous Access Hollywood “grab ‘em by the p@#$%” recording became public. 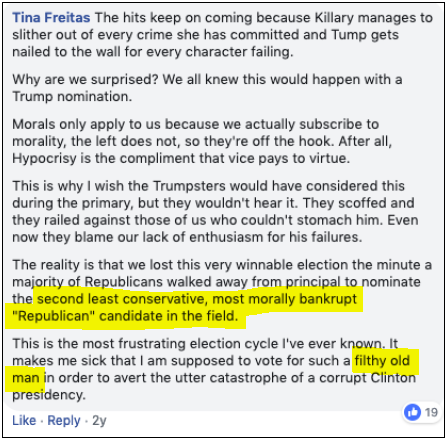 Of course, note how she opposed Trump in part because he wasn’t…wait for it…conservative ENOUGH for her? So yeah, that’s where the Republican Party is these days, including the recent lunacy in Prince William County, where Republicans nominated a far-right nutjob (John Gray) over a solidly conservative, but sane and experienced, guy in Martin Nohe. The question is, will Republicans do the same in the Hanger vs. Freitas race? We’ll find out in 12 days!

By the way, on a slightly-different-but-related topic, remember when Virginia Republicans made a big deal about how small dollar local donors were a sign of strength, authenticity, and grassroots support? Also, remember how the Virginia GOP claimed that when Terry McAuliffe raised money from national donors, he was an outsider/”carpetbagger?” Or when Tom Steyer invested money in Virginia to help elect candidates who vowed to support policies to address climate change, he was a meddling California billionaire?

It turns out that nearly 70 percent of Tina Freitas’ donations this cycle have come in the form of a contribution from a wealthy Californian named Chris Rufer, a libertarian who reportedly has invested more than $1 million of his own money to help elect so-called “liberty”-minded conservatives.

Of course, Republicans changing their tune when it suits their interests is nothing new. For instance, remember when Republicans were (supposedly) for free trade and cutting the deficit and not coddling foreign dictators like Putin and Kim Jong-un? Until Trump became “president,” and Republicans suddenly didn’t care about any of that stuff?

Hell, at least we can always count on Republicans – including Tina Freitas – to give tax breaks to their rich cronies and polluters, while opposing providing affordable, quality health care coverage to their own voters/constituents. Funny how that works. Do as I say, not as I do, I suppose. Isn’t that the GOP’s motto, basically?