Yesterday, an email went out from a group called the “Arlington Parent Coalition” to every single staff member in the Arlington County Public school system complaining that the county is working on a new transgender and gender non-conforming student policy that they claim proposes “unquestioning affirmation of cross-gender transition for all children,” and asking Arlington Public Schools to slow down the policy change, to avoid “capitulation to political and cultural trends.” I literally had to read that several times to figure out that they think “unquestioning affirmation” is something BAD for children.

The Arlington Parent Coalition was created on March 2, 2019, after the picture book I Am Jazz–a book that helps explain gender identity to children–was first prevented from being read to a class at Patrick Henry Elementary, and then subsequently was read to an Ashlawn Elementary School classroom, making the headlines on Fox News.

Their website features a transphobic video from Abigail Shrier, of PragerU (a fake “university” created by some conservative talk show hosts), where she laments the government forcing people to “ignore biology and common sense.”

In their email, they complain that the policy is being formulated in consultation with LGBTQ+ policy and lobbying organizations like the Human Rights Campaign, and GLSEN (the Gay, Lesbian and Straight Education Network, which works to end discrimination and bullying in schools based sexual orientation, gender identity, and gender expression). They cite “research” by the American College of Pediatricians (not a licensing organization as it’s meant to sound like, but rather a socially conservative advocacy group who advocates against the rights of gay and lesbian couples to adopt children, and advocates for gay conversion therapy), and by conservative think tank, the Heritage Foundation.

They suggest in their email some “important” questions that teachers and staff should ask the superintendent of schools.

I could go on for another 5,000 words about how angry this whole thing makes me. But I didn’t plan to spend my Mother’s Day fighting some intolerant transphobic group of conservative Arlington parents. But if you’re as angry as I am, please reach out to your school board members and/or the superintendent to let them know you support the development of a new inclusive policy. 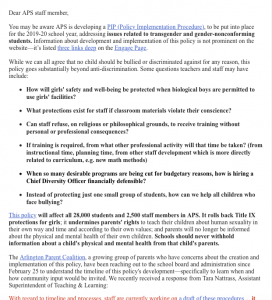 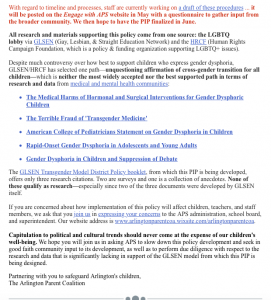