Just to catch everyone up on where things stand with the HD97 Republican nomination fiasco, which seems to get more contentious and confusing by the minute, see below. In short, the two candidates – Del. Chris Peace (R-HD97) and his Republican challenger, Hanover County Supervisor Scott Wyatt – are locked in an acrimonious fight over who will be the Republican nominee for the November general election in this overwhelmingly “red” district (65% Corey Stewart; Hanover County, New Kent County, King William County).

First off, Virginia Del. Chris Peace (R-HD97) was on WRVA yesterday, where he discussed what happened this past weekend. Here’s what he had to say (bolding added by me for emphasis):

“Frankly…this has been a flawed process from the outset. My opponent, Scott Wyatt, schemed with a small group of folks in our community to rig a process, to choose a convention method, without disclosing his interest in running for the seat, so it was an undisclosed conflict of interest from the beginning…Frankly, we were winning; we had pre-filed more delegates in every county in the district leading up until the week prior to the scheduled convention, when it was realized that no planning had been done for the event, and Monday a week ago, it was learned that the site, the venue that had been advertised for months, had actually fallen through….

I’m pleased that the state chairman has stood up and said that all of this is within the state party plan, that the legislative district committee acted in good faith and in the best interest of the voters…[On June 1] we will see a much greater turnout than the couple hundred that turned out to the fake convention on Saturday, the Wyatt rally that took place, where he purported to crown himself the nominee…It doesn’t mean anything, it wasn’t authorized…I don’t know why he’d be afraid of more voters voting…I believe that when more voters in our district participate, that I will be the nominee again.

There are at least 19 House Republicans that had the courage to step up and make a deal that had conservative entitlement reforms, do Medicaid expansion. I voted for the state budget which included expansion…We were investing in our people here in the Commonwealth…I think it was the right thing to do, I have no regrets…I don’t know when allowing people at the very low end of the spectrum to have access to health care for their families, with conservative entitlement, was somehow the litmus test.

…I’m confident that when you open it up to more voters, those voters will ratify [my] years of service, that dedication to our community, and will reject the politics of hate and put that behind us.”

For his part, Peace’s Republican opponent Scott Wyatt went on WRVA this morning, and he had a few choice things to say:

Meanwhile, as you can see in the following statement, the Republican Party of Virginia’s 97th Legislative District Committee asked that “any certification of the candidate Scott Wyatt by the Department of Elections be deemed invalid,” as the committee voted on May 1 to “cancel the May 4th Convention and further voted to conduct a Party Canvass on June 1, 2019.” 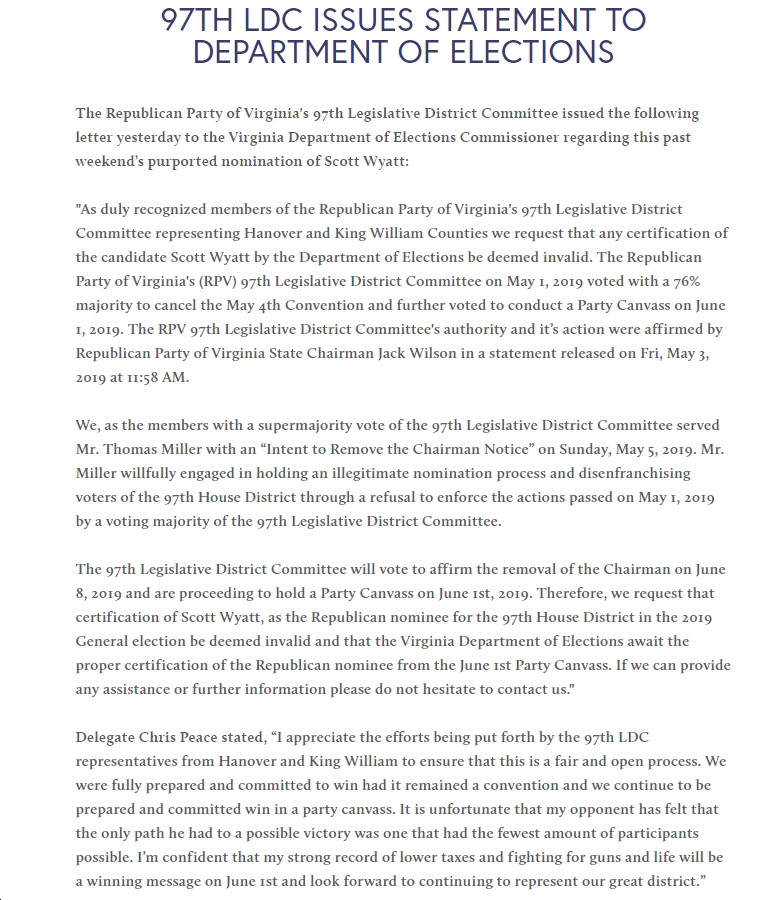 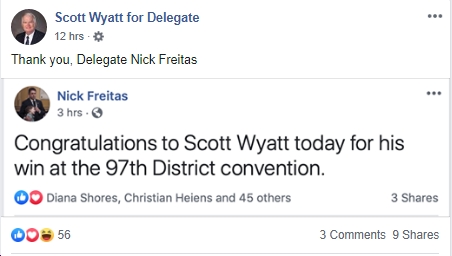 And here’s Peace, noting that the Virginia GOP Chair (Jack Wilson) “clarified not once but twice that [the] Wyatt campaign rally is nothing other than a political stunt…neither authorized by the LDC nor recognized by the Republican Party.” 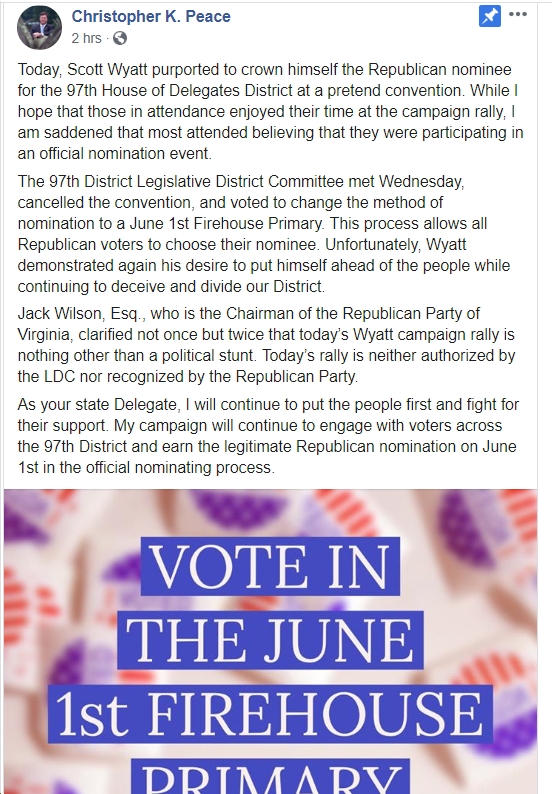 Here’s an email from RPV Chair Jack Wilson on May 1, stating that the convention “will be removed from the RPV’s website.” 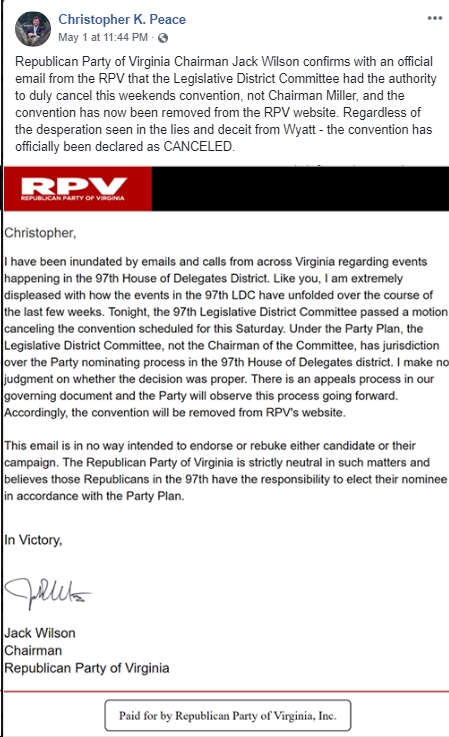 First, we want to congratulate Hanover Supervisor Scott Wyatt for his victory on Saturday at the convention. Scott defeated incumbent Del. Chris Peace with overwhelming support from the delegation.

As most of you know, this was a highly contentious race. There have been accusations of cheating, rigging, and underhandedness from both sides. Good and reasonable people on both sides of this contest are convinced they are in the right and the opposing side is wrong. What often gets lost in this debate are the facts. We would like to provide you with some clarity on how this all came down.

The contentiousness started when Del. Peace’s campaign accused Scott Wyatt of “rigging” the process. Their claim is that Scott voted for a convention because it would give him the advantage. (Actually, a convention levels the playing field because incumbents have tremendous advantages in primaries, across the country incumbents win 95% of elections.) Let’s be clear – Scott never voted for a convention. Scott tried to have himself removed from the Legislative District Committee (LDC), which makes the nominating-method decision. Dale Taylor, the Hanover GOP Chair, refused to remove him. There are witnesses who would testify to that. If Scott had quit, Hanover would not have had a representative on the LDC, and that would have been unfair to Hanover voters. The next best thing was for Scott to send an uninstructed proxy to the meeting. Let me repeat, SCOTT NEVER VOTED FOR A CONVENTION.

The next thing Del. Peace’s campaign did was to argue that conventions disenfranchise voters because not everyone can attend a convention. You can argue all day about conventions versus primaries, but you would be wasting your time because both conventions and primaries are allowed under the Republican Party State Plan. If you don’t like conventions, then I suggest you get fully engaged in the Republican Party and try to change the Party Plan. Until that happens, conventions will always be an option for the Legislative District Committees.

But then the situation changed. After the mass meetings the Peace campaign attempted to change the rules in the middle of the process. How absurd to attempt to prevent delegates from casting their votes! It’s akin to telling voters – in the middle of Election Day – that the election has been cancelled and the polls will not be open.

It’s worth noting that the Peace campaign could appeal the results of the convention, but that would take the nomination out of the voters’ hands and into the 1st Congressional District Committee. It could then go to the Republican Party’s State Central Committee, and lastly, to the court system.

We hope this has provided some clarity to this nomination contest! Feel free to contact us at The Middle Resolution if you have any questions.

The voters of the 97th district have spoken. Onward to November! Fighting for Your Values!

Thank you to @SecondGentleman @DouglasEmhoff for helping us keep @EFillerCorn as the first female, first Jewish Speaker of the VA House of Delegates. And a great one at that! https://bluevirginia.us/2021/10/saturday-news-democrats-narrow-differences-on-bidens-agenda-mull-billionaire-tax-january-6-wasnt-a-riot-it-was-war-facebook-allowed-hate-illegal-activity-to-go-unchecked#comment-5581376375

Friday Night Update from the ER in Arlington, VA: “Moderna has...