See below for reactions to this morning’s Supreme Court rulings by Virginia elected officials.

“I’m pleased the citizenship question will remain off the census for now, and I hope it will stay off. Turning the census into an ideological tool to intimidate immigrants is immoral and could result in Virginia being undercounted next year, reducing our fair share of federal dollars.

“I’m disappointed the Supreme Court will allow partisan gerrymandering to continue plaguing our system. Voters should pick their leaders, not the other way around.”

“This infuriating, political decision will dismay everyone who opposes partisan gerrymandering, which is a terrible and undemocratic practice no matter who does it. Any system that allows politicians to choose their voters instead of voters choosing their elected leaders is fundamentally wrong.  With the Supreme Court’s failure today, we need legislation to fix partisan gerrymandering. My forthcoming bill, the Fair Representation Act, would do so.”

“Shortly before the Administration announced its plan to add a citizenship question to the decennial census, I spoke personally with Secretary Wilbur Ross to share my deep concerns about the harm such a question would do to the integrity and accuracy of the Census. What was clear at the time of the phone call, and has now been confirmed by the Supreme Court, is that Mr. Ross had already made up his mind and was just checking a box. Now, after testimony, rigorous oversight, and the revelation of the Hofeller documents made available posthumously, the Supreme Court has ruled that Secretary Ross lied to Congress and the American public. This is a vindication of the work of the House Oversight Committee and demonstrates the importance of our ongoing investigations and oversight responsibilities.

There is everlasting shame brought to the Trump Administration in its original motivations to add this question. It was designed to suppress the participation of minorities, people of color, and immigrants, all in a reprehensible effort to diminish their representation, including in the U.S. Congress. The fact that this would be the case debases the whole purpose of having an accurate Census, as is required by the Constitution of the United States.

While a narrow majority of the Supreme Court upheld the clear constitutional intent of the census, and struck a blow for democracy in the process, it remains deeply disturbing that four members of the highest court would, nonetheless, think it is acceptable to countenance the mendacity and patently partisan political intent of the Administration to manipulate the census to its own ends.  This is a stain these justices will wear forever.”

Without acknowledging what happened in 2016 we can’t prepare for future elections. The SECURE Our Democracy Act will send a clear message that there will be severe consequences for interfering with US elections. People have to be held accountable. pic.twitter.com/ySuX6Uh5bt

From the VA Senate Dems:

“Today’s SCOTUS ruling highlights the importance of flipping Virginia blue this year! Virginia Republicans have made it clear that they’re not above racial or political gerrymandering. They’re only interested in protecting their power and their narrowly-held majority, at any cost.

It’s in the hands of voters to hold their elected officials accountable and demand fair maps. To end partisan gerrymandering and ensure fair maps, we must flip the Virginia House and Senate this year!”

From Fairfax County Supervisor (and likely the next Chair) Jeff McKay: 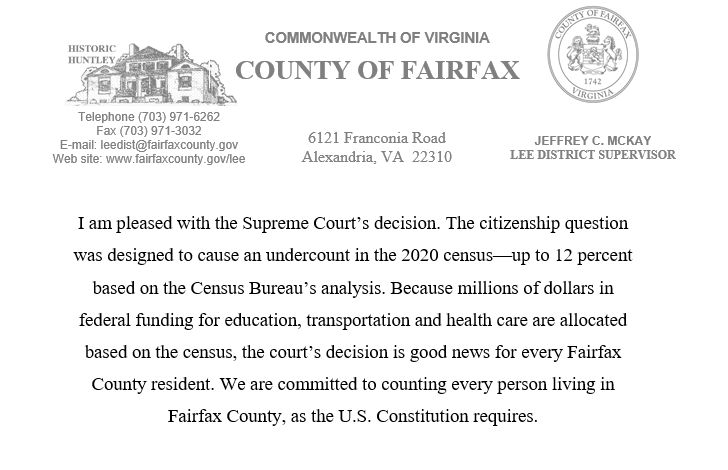