Is this revealing about the hard-core Trump Republican mindset or what? First off, neo-Confederate, Trump-worshipping Corey Stewart (R), who was crushed by Sen. Tim Kaine last November and is mercifully, FINALLY retiring as Prince William County Board Chair, finds Trump backing down on the ICE raids he’d threatened to begin yesterday. That’s not surprising, of course, as Corey Stewart’s been rabid on this issue for over a decade now (as Stewart likes to babble, he was “Trump before Trump was Trump”). Also not surprising is that neo-Confederate Corey’s Facebook fans reacted strongly to his post on this, with 395 reactions as of right now: around 415 “angry” reactions, 75 “sad” reactions, and 145 “likes” (agreeing, presumably, with neo-Confederate Corey saying Trump backing down was “very disappointing”). A window into hard-core Trumpster world, where Trump isn’t nasty, extreme, or xenophobic ENOUGH. Disturbing. 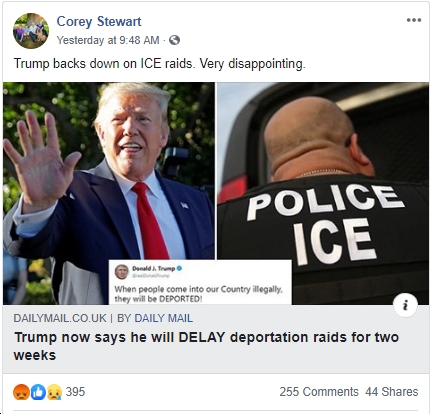