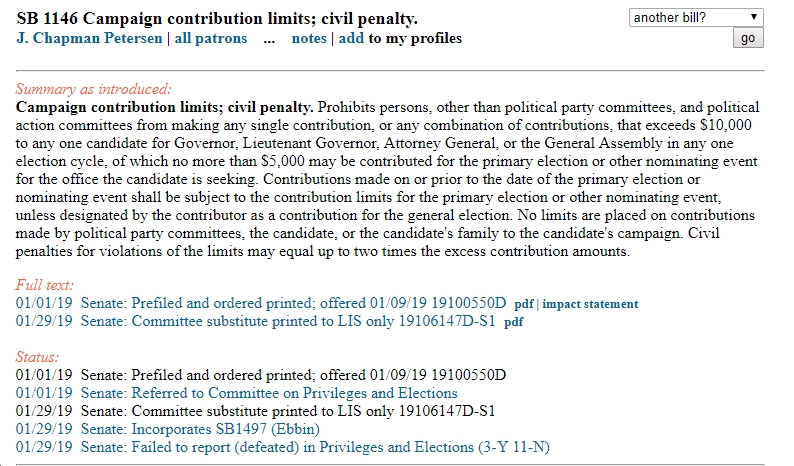 The following press release comes from Del. Patrick Hope (D-HD47), Del. Kaye Kory (D-HD38), Sen. Chap Petersen (D-SD34) and Sen. Jennifer Boysko (D-SD33).  Personally, I strongly support – and have supported for many years – comprehensive campaign finance reform which gets big corporate (including, obviously, state-regulated utilities like Dominion Energy) and individual money out of politics (or at least limits it), and which instead puts the emphasis much more on small-dollar donors and perhaps a public finance system of 4:1 or whatever matching funds for donations under $100 (or whatever limit one wants to set). I’d do this as a package, like HR1, and not piecemeal. What do you think? Is this constitutional in a post-“Citizens United” world?

The legislation will be modeled after SB 1146 (2019) http://lis.virginia.gov/cgi-bin/legp604.exe?191+sum+SB1146, prohibiting individuals and political action committees from making any single contribution, or any combination of contributions, that exceeds $10,000 to any one candidate for Governor, Lieutenant Governor, Attorney General, or the General Assembly or other local office in any one election cycle, of which no more than $5,000 may be contributed for the primary election or other nominating event for the office the candidate is seeking.

Senator Peterson said, “It is not healthy for democracy for one wealthy donor to underwrite a campaign, especially when that donor has no connection to the community.”

Senator Boysko said, “Democracy has suffered since Citizens United, allowing the rich and the powerful to influence elections. We’re experiencing this negativity first-hand in Virginia’s local primaries where a single outside donor is using a loophole in the law to influence our elections. I shudder to think, ‘What’s next?’”

Delegate Kory said, “Money from a super PAC is casting a shadow over our Virginia Democratic primary elections. Campaigns in our Commonwealth should be funded honestly and transparently, not by streams of endless funding unrepresentative of the local community of voters.”

Delegate Hope said, “Allowing the ultra, super-rich and wealthy to influence the outcome of an election and forever effect government decisions is anti-democratic. Super PACs corrupt our political system and threaten our democracy. The legislature must take action to limit the impact such excessive campaign contributions have on our system.”