The following is a very helpful table from political researcher/map-maker Emil Shabanov. The big question in my mind is whether this November’s turnout “universe” looks more like: a) previous “off-odd” election years, which had miserable turnout, particularly among the Democratic “base”; b) the 2017 Virginia gubernatorial election turnout pattern, which saw an anti-Trump “blue wave” of Democratic voter turnout; c) somewhere in between, and if so, where exactly?

That would be as many as 5-6 Democratic pickups, giving us potentially 24 or 25 Senate seats out of 40, which would be a very nice margin. On the other hand, if turnout is more like the last “off-odd” election year (2015), the road to a solid majority will be a *lot* tougher, but hopefully we could still pick up 2-3 seats and take back control…albeit not by a wide margin. So let’s shoot to get Democratic turnout closer to 2017 than to 2015, and we should be in very good shape in the State Senate. 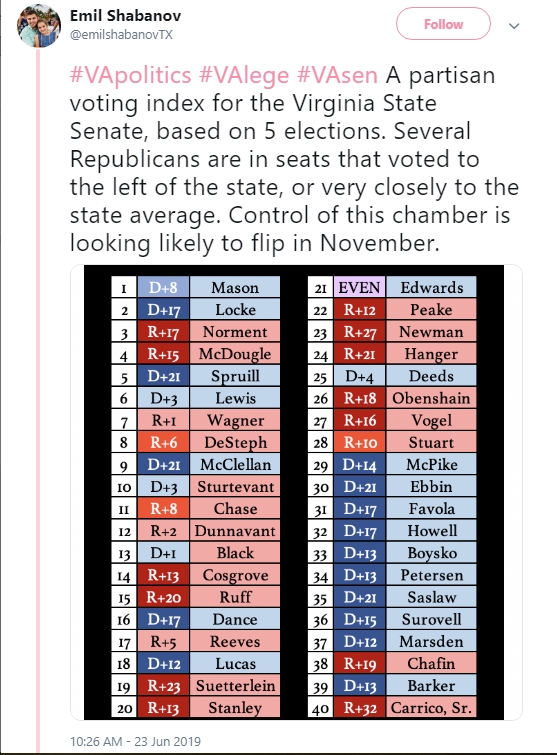 Former VA Speaker @EFillerCorn, who helped lead passage of a number of gun safety laws, calls on LG Sears to "turn the plane around and cancel your Texas NRA fundraiser"; calls on Gov. Youngkin to "stop these rollbacks for the remainder of your term" https://bluevirginia.us/2022/05/after-mass-shooting-in-elementary-school-leaving-19-children-dead-lt-gov-sears-will-be-keynote-speaker-at-nra-event-in-texas-this-weekend#comment-5867810021

.@djrothkopf: “The reason that Republicans were willing to storm the Capitol to overturn a fair election…is because they fear the majority” (What Rs fear is that, "on issue after issue, what's best for the country is what most people want.") https://bluevirginia.us/2022/05/david-rothkopf-the-reason-that-republicans-were-willing-to-storm-the-capitol-to-overturn-a-fair-election-is-because-they-fear-the-majority