The following Facebook post (see screenshot, below), by neo-Confederate Corey Stewart (R), really epitomizes the authoritarian, cult-like attitude of Trump cultists. In short, according to the Corey Stewarts of the world (and their supporters; check the comments section on his Facebook post!), if you aren’t a fan of Trump (aka, the corrupt, bigoted, authoritarian, ignorant buffoon temporarily besmirching the White House), then you aren’t “proud of our country.” Notice how neo-Confederate Corey, who Tim Kaine thankfully CRUSHED last November, conflates mindless adulation of Trump with love of country? In stark contrast, I’d argue that resistance to Trump’s un-American, anti-rule-of-law, anti-constitution, dictator-embracing, ally-insulting, immigrant-bashing, race-baiting, science-denying, court-stacking, child-caging, climate-destroying, “p***y-grabbing” presidency actually shows that we absolutely *are* proud of our country’s highest ideals, including rule of law and equality under the law, and that we furthermore are willing to fight (politically, peacefully but firmly) for those ideals. As for neo-Confederate Corey and his ilk, what are *they* proud of, exactly? I know, that’s a scary thought. For my part, I’m very proud of the U.S. Women’s Soccer Team and wish them the best of luck today in winning the World Cup. Go Red, White and Blue! 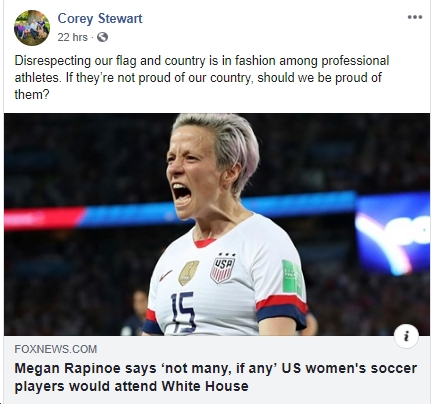