In this case, Rep. Abigail Spanberger (D-VA07) went on far-right Trumpster radio (“The John Fredericks Show”) this past Thursday (audio here), and the former Virginia Trump 2016 chair asked her, “do you think President Trump is a racist?” Now, keep in mind that if there’s *one* thing that Trump’s entire adult life has been defined by, other than ripping people off, losing tons of money and getting taxpayers to bail him out, etc., is….yep, RACISM.

For more on that topic, see Donald Trump’s long history of racism, from the 1970s to 2019, which goes back to 1973, when “Federal officials found evidence that Trump had refused to rent to black tenants and lied to black applicants about whether apartments were available, among other accusations.” This type of racist crap went on for decades. And, the article adds, “On top of all that history, Trump has repeatedly made racist — often explicitly so — remarks on the campaign trail and as president.” The article’s bottom line: “At the very least, Trump has a history of playing into people’s racism to bolster himself — and that likely says something about him too.”

So is Trump a racist? Here are a few Democratic presidential candidates on that topic:

Clearly, the vast majority of Democratic 2020 presidential candidates believe Trump is a racist – and are not afraid to say so publicly. As for Rep. Spanberger on the John Fredericks Show this past Thursday, her response to the question was as follows:

“I can’t make that judgment one way or the other…he says things that hurt people…that divide a community…that I wish he would not say, but I don’t know the man and I want to believe that there is goodness in everyone, I want to believe the best intentions in everyone, but I truly truly hope that this shooting in El Paso has been a wakeup call for him to change some of the rhetoric, to be more purposeful in what he says and to recognize that his words, more than anyone else in the world…have a significant power, and I don’t think he’s been using the power of his words in a responsible way at times…I am disappointed in the rhetoric I hear across the spectrum – on my side of the aisle, on the Republican side of the aisle, to just be clear about that…[but] this individual in El Paso used words to justify his murders that the president has used; words like ‘invasion’ and his focus on immigrants, and I think when we have someone in the highest office talking about immigrants being ‘criminals’ and ‘rapists’, that is not appropriate language…”

OK, so that’s a bunch of (very weak) words, strung together into (also every weak) sentences, meaning…who knows what. But in all of that verbiage, did anyone hear Rep. Spanberger actually absolve Trump of being racist? Because John Fredericks’ headline on his YouTube video was that Spanberger supposedly said “Both Sides Need to Ratchet Down Rhetoric: Trump’s Remarks Divisive – Not Racist.”

In response, as you can see in the screenshot below, Spanberger tweeted at Fredericks:

“Thanks for having me on the show. I appreciated the discussion, but please let me be very clear on one important thing: The President has frequently made racist statements and stoked division in our communities with hurtful, bigoted, and incendiary language.”

“Do you think President Trump is a racist? Yes or no? Simple question. On air, you said you didn’t know – which means you have no direct evidence of it. Don’t waffle, be precise.”

As far as I’m aware, Spanberger doesn’t seem to have directly responded to this. But great response by Virginia Democratic activist and 2016 Spanberger for Congress supporter/volunteer Carrie Pruett, who tweeted in response:

“There’s no difference between ‘taking frequent racist actions’ and being racist, Congresswoman, which you know, and allowing JF to treat this like a gotcha only hurts the cause of antiracism.“

Also, Rep. Spanberger did tweet the following on Friday afternoon:

“When the most powerful man in our country espouses bigotry and racist rhetoric and works to vilify people and divide communities, he is normalizing hatred and Congress must act to address the threat of domestic terrorism that flourishes in this environment.”

So that’s fine, in and of itself, although it still doesn’t clearly say that Trump’s a racist, only that he “espouses bigotry and racist rhetoric.” Of course, I suppose it’s theoretically possible (yes, this is a stretch) to espouse “bigotry and racist rhetoric” without oneself being a bigot and/or racist, but…seriously? I mean, if all this hemming and hawing isn’t a clear-cut violation of Occam’s Razor, what on earth is?

More to the point, what possible upside is there for Democrats to go on right-wing media, especially when the right-wing host twists/distorts the Democrats’ words, claims they said something they didn’t say, then argues with them on Twitter? In this case, does anyone really think that Trump supporters are going to vote for Spanberger in November 2020 because she didn’t quite call him a racist on right-wing talk radio? Hmmmm… 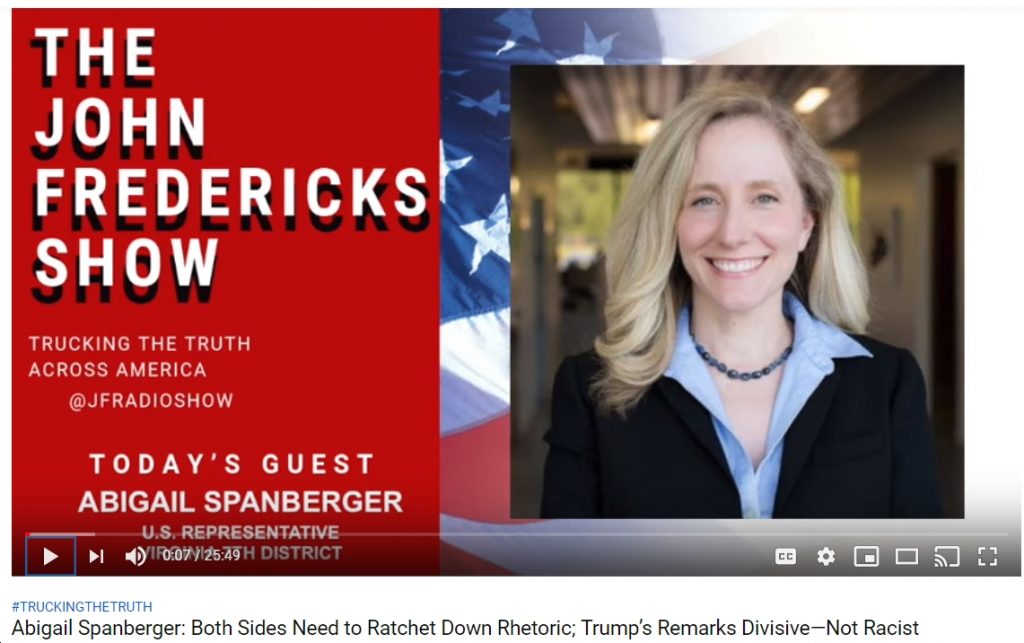 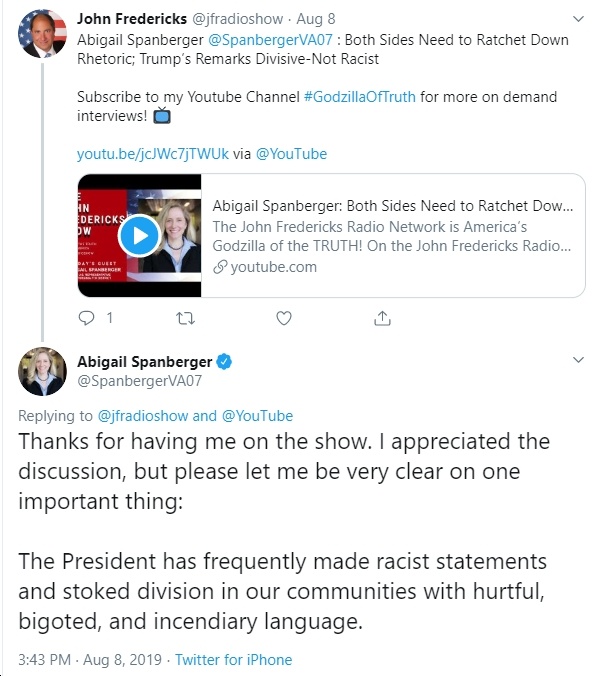 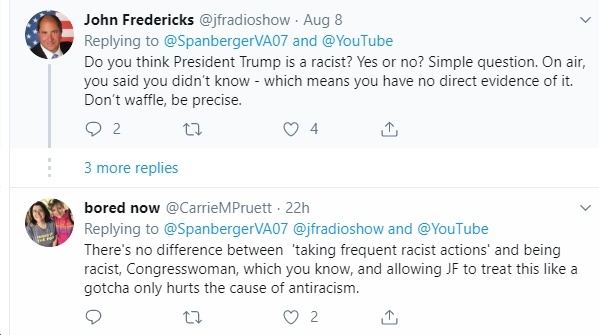 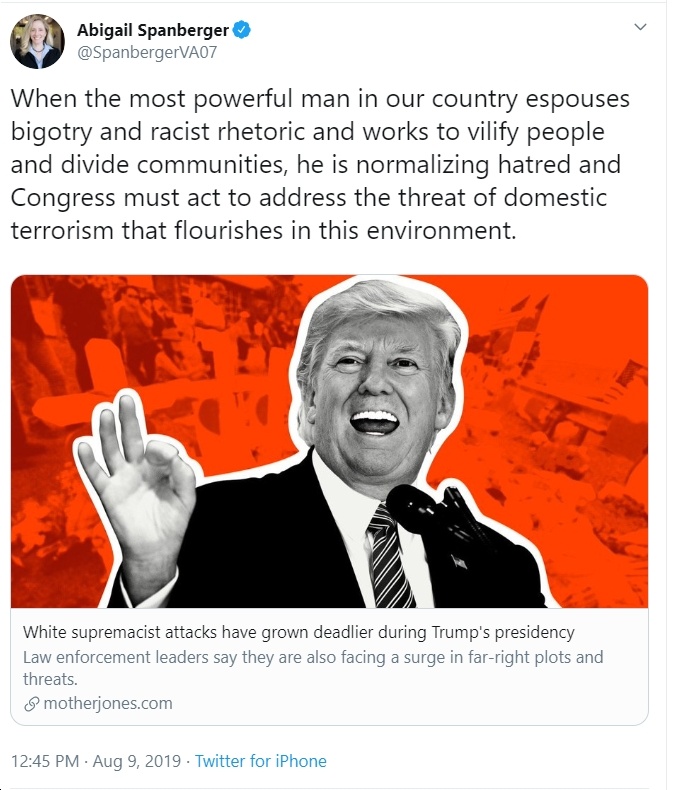 Definitely not smart to mess with @SenLouiseLucas! https://bluevirginia.us/2022/01/monday-news-can-sci-fi-wake-us-up-to-our-climate-reality-biden-cranks-up-pressure-as-putin-mulls-ukraine-invasion-acoupinplainsight-youngkins-masking-order-plunges-virginia-schools-i#comment-5706580770

Yep, this is Rob Wittman to a "t" https://bluevirginia.us/2022/01/monday-news-can-sci-fi-wake-us-up-to-our-climate-reality-biden-cranks-up-pressure-as-putin-mulls-ukraine-invasion-acoupinplainsight-youngkins-masking-order-plunges-virginia-schools-i#comment-5706532694 h/t @GerryConnolly