Good to see Sen. Tim Kaine calling out the Conspiracy-Theorist-and-Racist-in-Chief (see tweets, below) for not doing his job, but instead “spending [his] time patrolling the internet for weirdo conspiracy theories to promote” about Jeffrey Epstein. Of course, Trump’s the same guy who has promoted numerous other wacked-out conspiracy theories, like…

So, sadly, I suppose we can’t be surprised that Trump’s now spreading “weirdo conspiracy theories,” as Sen. Kaine correctly describes them, about Jeffrey Epstein. But we can all be disgusted that such an appalling, ignorant buffoon somehow made it to the White House. Because the fact is that, even assuming we defeat Trump in November 2020 – which of course we must – “The Shame and Disgrace Will Linger.” In the meantime, sadly, “this presidency shames and disgraces the office every minute of every hour of every day.”

P.S. Here’s the Trump “retweet” that Kaine’s referring to. As former Acting Solicitor General of the United States Neal Katyal writes, this would be “outrageous” if trump were “a member of a local city council, let alone the person who is to Take Care that the Laws be Faithfully Executed.” 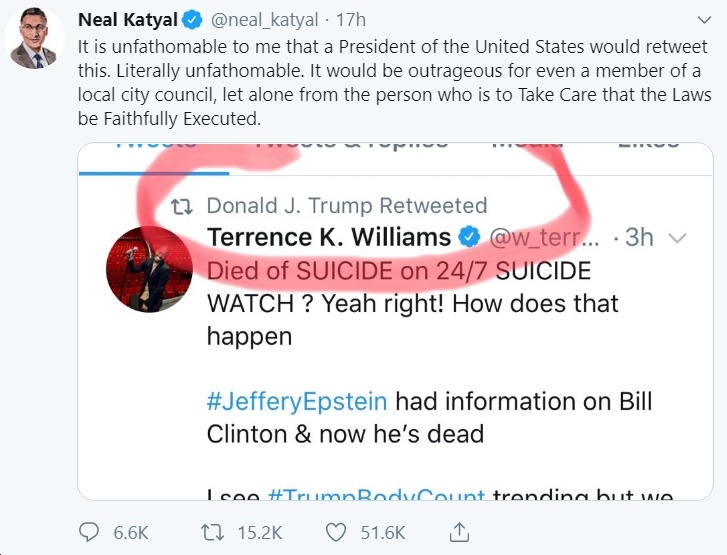