What would the corrupt, incompetent, insane orange buffoon’s reaction be if he were greeted by the following headline the morning after the Virginia elections on November 5? My guess is that, among other things, his head would likely explode with rage and frustration. And yes, that would be a very good thing. 😉 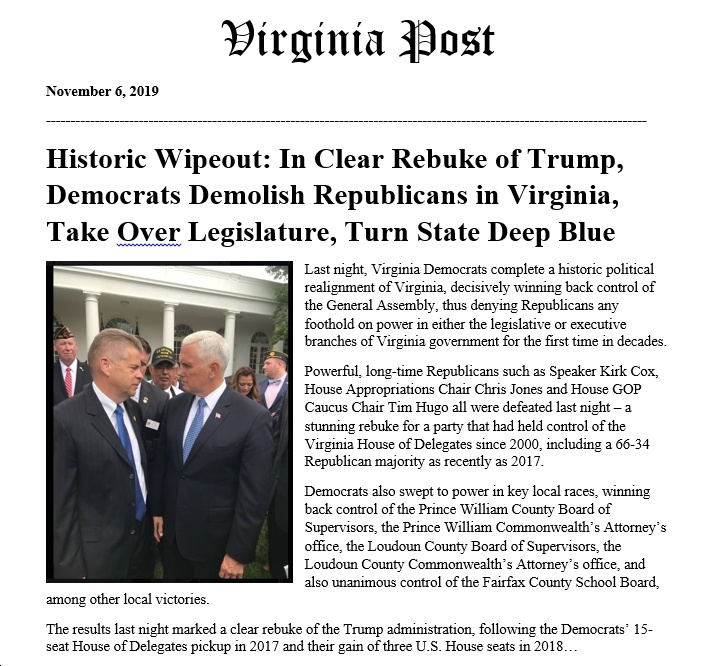 The bad news, of course, is that this news story is only hypothetical at this point – certainly hasn’t happened yet, and very well might never happen.

The good news? This outcome is something Virginia Democrats can actually work to make happen over the next 72 days. Or, again, we can FAIL to make it happen over the next 72 days. But if we *do* work our butts off between now and November 5 to make that news story happen, not only will it be a great thing in and of itself – imagine the legislation that Dems could pass, from gun violence prevention to a clean energy transition to ratifying the ERA to expanded healthcare access, to…you name the issue – but it would also create a superb narrative heading into the crucial 2020 elections. Imagine if we could point to the continued “blue wave” in Virginia in order to motivate Democrats and, hopefully, demoralize/de-motivate the Trumpsters? And yes, I strongly believe in the power of narrative, particularly when it taps into core emotions, given that this is the way humans have communicated since time immemorial.

The other thing, I’d argue, is that it’s important to envision success, then work towards it. Of course, that’s not the same thing as *assuming* success. But right now, there are so many distractions – the 2020 presidential race, Trump’s daily insanity, the Amazon burning, you name it – that Virginia Democratic activists might not be focused as laser-like as they should be on the elections for our entire General Assembly, plus important local offices, this November 5. Perhaps envisioning a “Dems demolish Rs in Virginia heading into 2020” headline might help with that focus?

By the way, it’s interesting to look back at previous election cycles, to see if there’s any relationship – or how strong a relationship – between what happens in Virginia in the odd years and what happens nationally in the even years. For instance:

Regardless of how predictive Virginia’s odd-year elections actually are (or aren’t) of national elections the next year, I’d still very much argue that a big Democratic victory in the November 5, 2019 Virginia elections would not only be good in and of itself, but would create a superb narrative line heading into 2020. And if that helps motivate Democratic activists to get/stay involved and engaged, I’m all for it.