I grab my phone just as it stops vibrating.

“Who do we know from Newark, New Jersey?” I ask my husband.

“Cory Booker!” he jokes. I assume it was probably some sales call, although 9:45 pm seems like a strange time for it. Then I see the voicemail light.

My mantra on the 2020 Presidential race has been “I’m totally focused on Virginia, 2019. I’ll give a little support and a token donation to anyone who comes to Virginia to stump for our elections, but otherwise, talk to me after November 5th.”

But I do like our 2020 candidates–I like bits and pieces of many of them. And every time I’ve watched Senator Booker in a debate, he’s grown on me. Especially the MSNBC Climate Town Hall. Just when I started to think I might start to lean that way, his campaign announced that their financial situation might not be strong enough for them to proceed in the race. They had a plan that they believed gave them at least a chance to win (ground game, digital, media, travel etc.), but their fundraising wasn’t on track to pay for that plan.

So, I sent a token $10 and wrote a few tweets about why I thought it was really important that Cory Booker stay in the race longer. Because it’s not 100% about who wins the nomination at the end–the nomination process is also a conversation among Democrats about what our priorities are, what policies we support, what we want our collective voice to sound like. And for me at least, I like the way that Cory Booker is contributing to and shaping that conversation. 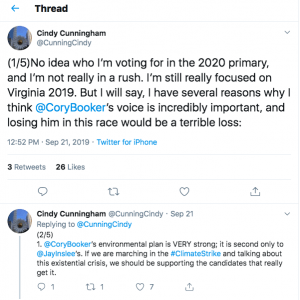 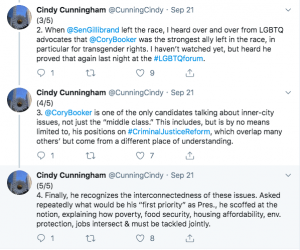 So, Cory Booker called me last night. In person. Not to ask for money, but to thank me–me, an avowed undecided voter–for my message, which he said inspired him. And if you know me at all, you know that inspiring an underdog candidate I admire to keep going, to keep talking about these issues that matter, to keep using that unique and powerful voice, is what I love to do.

Oh, by the way, it turned out a LOT of other people weren’t ready to lose his voice in this race, and have chimed in and donated, and as of last night, the campaign had less than $300,000 to go. But guess what he’s doing today instead of calling around for money? He’s right here in Virginia, helping Hala Ayala win on November 5th 2019! If you haven’t paid any attention to him yet, or you’re not sure whether you like him, here’s a great chance to focus on 2019–knock some doors for Hala–and also meet him. Hope to see you there! 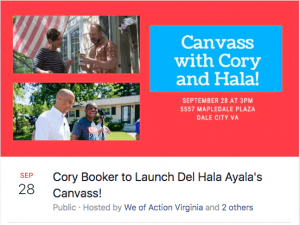