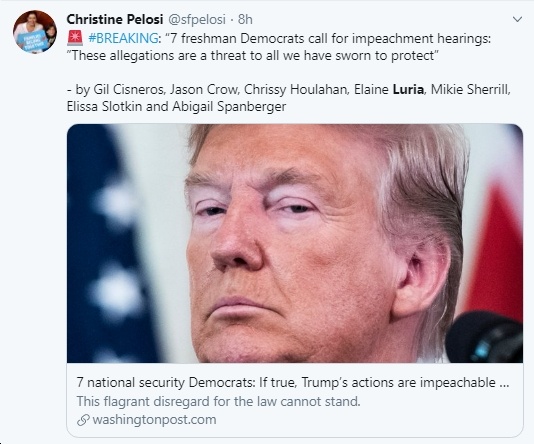 It looks like Trump’s finally crossed the line, in which even freshmen House Democrats from “purple”/swing districts have concluded that his “flagrant disregard for the law cannot stand,” and that if “these allegations are true:

“…we believe these actions represent an impeachable offense. We do not arrive at this conclusion lightly, and we call on our colleagues in Congress to consider the use of all congressional authorities available to us, including the power of “inherent contempt” and impeachment hearings, to address these new allegations, find the truth and protect our national security.”

Yep, Trump’s latest definitely appears to have been the “tipping point”; see below for Rep. Luria’s and Rep. Spanberger’s statements. As Luria writes, it is “clear to me that [Trump] has betrayed the public trust and abandoned his obligations to the Constitution by elevating his own interest above the national interest…The House must move forward with impeachment.” At this point, I completely agree; Trump’s utterly out of control, lawless, reckless, a clear and present danger to our democracy, you name it. Even if Republicans refuse to act, which is likely because they are craven cowards and/or blind partisans, it’s time for Democrats to act forcefully to protect our country from a completely out-of-control president. Thanks to Reps. Luria and Spanberger for stepping up and leading in these seriously troubled times. 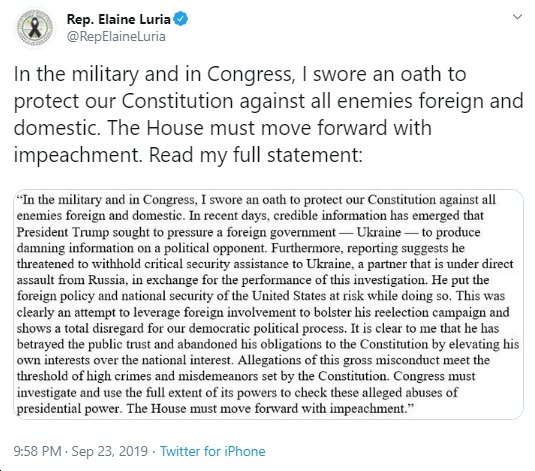 “To the People of Central Virginia—

“On January 3, 2019, I swore an oath to uphold and defend the Constitution of the United States. It was the third time in my life of public service that I had taken such an oath, but the words were just as profound to me as the first time I spoke them. On the floor of the House of Representatives, I affirmed my fidelity to the Constitution in front of the American people.

“Over the past nine months, I have worked faithfully to deliver on my promises to the people of Central Virginia. I have focused on local issues, and I have introduced and supported healthcare and infrastructure legislation that would make a real difference in the lives of our neighbors. I’ve hosted town halls in each of the 10 counties I represent, and I’ve heard directly from many of you—both those who agree and those who disagree with my positions. I have joined bipartisan working groups and worked to build relationships and sponsor effective legislation with my Republican colleagues. I have voted on the merits of legislation, voting both “with” and “against” my party. I pledged to put country before party and assert my independence when it reflects my principles or the needs of Central Virginia, and I have done that.

“While many of my Democratic colleagues have called for investigations and inquiries over the last nine months, I have not. I have been clear in my desire to pursue evidence, but I have felt that a rush to designate a preferred outcome would be irresponsible and could be seen as partisan. I have believed that this partisanship would further divide our country and distract us from the fact that our elections and electorate were attacked in 2016. So while others called for inquiries and impeachment, I got to work. I co-founded a task force to understand and define our nation’s vulnerabilities and legislate to protect our elections and electorate from potential foreign influence and attack in our upcoming elections.

“But the newest allegations against the President of the United States have started a new chapter, and they must be treated as such. The allegation that the President may have used his position to ask a foreign leader to investigate a political rival to benefit his reelection efforts is shocking. That he may have tried to use U.S. taxpayer-funded security assistance funding as leverage in this effort represents a national security threat. In addition to the alleged actions of the President, the Administration is also blocking the Intelligence Community Inspector General from providing “urgent” and “credible” whistleblower information to Congress as required by law. The people of Central Virginia and the entire country deserve answers.

“As Congress digs deeper into these serious allegations, my focus in the House of Representatives will remain the same—I’ll continue fighting to lower prescription drug costs, boost healthcare coverage, expand our broadband infrastructure, address our growing debt and deficits, and build bipartisan coalitions. And I will continue to fight to uphold our Constitution. It is my honor to serve as your U.S. Representative.”