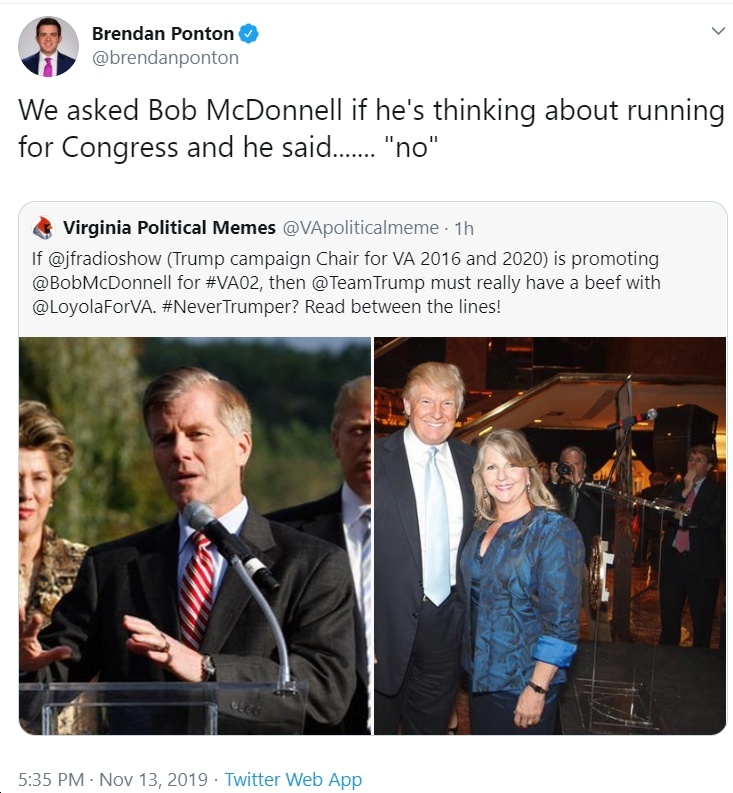 It’s often difficult to know when Trumpsters like Rep. Morgan Griffith (R-VA09) and right-wing radio host John Fredericks are serious and when they’re just throwing stuff out there for the hell of it. In this case, how about…former Virginia Gov. Bob McDonnell running against Rep. Elaine Luria (D-VA02) in 2020? According to Fredericks:

And here’s Rep. Griffith on this prediction:

“Well, you know, Bob is a dear friend of mine, and it’ll be interesting to see. The Democrats will bring all that trumped-up stuff they brought up before, but in this environment I don’t know that it matters.  And I’m just going to tell you – Bob McDonnell is one of the best men I have ever known. So I would welcome him in the United States Congress.”

Check out the audio below. But first, just a few quick highlights from McDonnell’s illustrious career.

2003: Jim Spencer of the Daily Press wrote: “McDonnell, a man considering a run for Virginia attorney general, apparently has decided to warm up by appointing himself head of Virginia’s new Ministry for the Promotion of Virtue and the Prevention of Vice. If you thought such overbearing minions of morality existed only among Afghan extremists, think again. Taliban Bob says Newport News Circuit Judge Verbena Askew may not be fit for reappointment to the bench if she ever violated the state’s crimes-against-nature law.”

2006: “On May 25, McDonnell appeared on Robertson’s Christian Broadcasting Network to tout his work on behalf of an anti-gay constitutional amendment and to fawn over the controversial televangelist. The Virginia official, who is a graduate of Robertson’s Regent Law School, is doing everything in his power to add a draconian change to the state constitution that would write the religious majority’s views on marriage into the state’s governing document.”

2010: “It’s fine that Mr. McDonnell decided to proclaim April as Confederate History Month; the Confederacy is an important chapter of history that merits study and draws tourists to Virginia. But any serious statement on the Confederacy and the Civil War would at least recognize the obvious fact — that slavery was the major cause of the war, and that the Confederacy fought largely in defense of what it called “property,” which meant the right to own slaves. Instead, Mr. McDonnell’s proclamation chose to omit this, declaring instead that Virginians fought “for their homes and communities and Commonwealth.” The words “slavery” and “slaves” do not appear.” Even more incendiary is the proclamation’s directive that “all Virginians” must appreciate the state’s “shared” history and the Confederacy’s sacrifices. Surely he isn’t including the 500,000 Virginia slaves who constituted more than a quarter of the state’s Civil War-era population, who cheered the Union and ran away to it when they could.”

2014: “On January 21, 2014, McDonnell and his wife were indicted on federal corruption charges. The charges followed a months-long federal investigation into gifts McDonnell received from a political donor.[213][214] They were charged with fourteen different counts relating to their acceptance of more than $135,000 in gifts, including a Rolex watch, loans, trips and other items from Jonnie Williams Sr., former CEO of Star Scientific, a company developing a compound called anatabine as a dietary supplement and as a drug. In 2013, McDonnell repaid more than $120,000 to Williams and apologized for bringing “embarrassment” to the state. McDonnell insisted he did not break the law and vowed to fight “these false allegations”.[215][216] He became the first Governor of Virginia to be indicted for actions committed during his tenure.”

Also in 2014: McDonnell’s BFF Pat Robertson claimed that prosecuting McDonnell for corruption is “destroying this natoin.”

2015/2016: “On January 26, 2015, the 4th U.S. Circuit Court of Appeals ordered that McDonnell remain free pending appeal,[227] but on July 10, 2015, the court affirmed McDonnell’s conviction.[228] On August 31, 2015, the U.S. Supreme Court ordered that McDonnell remain free pending a decision from that court to hear or not hear the case.[229] On December 8, 2015, the U.S. Solicitor General and others filed a brief with the Supreme Court requesting the court not to hear the case…After reviewing the Supreme Court decision and the response of the original prosecution team, which wanted to retry the case, the Justice Department announced on September 8, 2016, it would move to dismiss all charges against McDonnell and his wife.”