Here’s an idea for students at the University of Virginia, Virginia Tech, James Madison University, Christopher Newport University, William and Mary, Norfolk State, Washington and Lee, Shenandoah University, the University of Richmond, the Virginia Military Institute, Old Dominion University, Hampton University, etc. Yes, it’s time – actually, long past time – for colleges and universities to divest their endowments of planet-killing, uneconomical fossil fuels. The future you save might very well be your own. 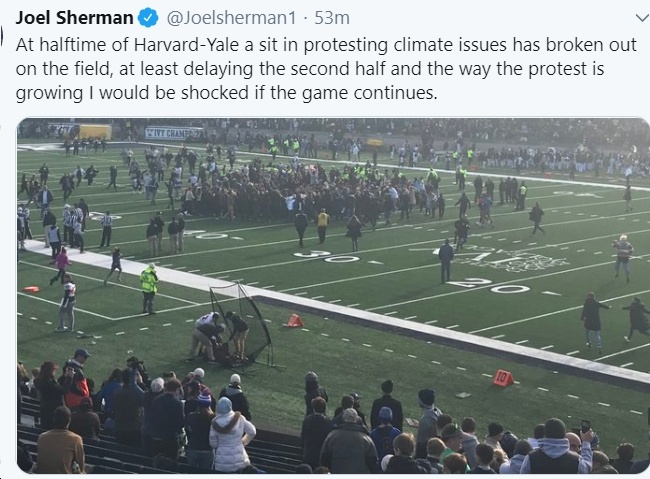 The Harvard-Yale football game has been delayed due to students protesting climate change in the middle of the field. pic.twitter.com/uY9Kc3Mn32

NEW HAVEN, CT — Over 200 students and alumni stormed the field at the annual Harvard-Yale football game to demand that Yale and Harvard divest their endowments from fossil fuel corporations and instruct their fund managers to cancel their holdings in Puerto Rico’s debt. The students held banners including, “Nobody Wins: Harvard and Yale Are Complicit” and “Yale and Harvard Students United for Climate Justice.”

“There is no meaningful climate action without climate justice. We’re tired of Harvard and Yale ignoring our voices. Today is an unprecedented escalation of our fight to hold our universities accountable for their unethical investments,” said Ilana Cohen, Harvard ‘22.

Harvard may have won the game last year, but both Harvard and Yale are losing badly in their efforts to address climate change. Puerto Rican families still have not recovered from the devastation of Hurricanes Maria and Irma, wildfires are burning homes to the ground in California, and the latest UN climate report says we have just 10 years to cut our emissions in half and rapidly transform our economy and society.

Meanwhile, both universities delay climate action by refusing to address the climate emergency with the urgency it demands. Yale’s recent position paper on climate change supports continued investment in the growth of the fossil fuel industry “until alternative energy technologies and infrastructures are more fully developed and more broadly implemented.” Harvard’s recent climate shareholder engagement initiative sets weak gradual targets of disclosure and does nothing to target the industry’s destructive business model. We know that the climate crisis cannot wait. Our universities needs to choose a side: students or fossil fuel billionaires?

“I’m here because I hope [the students’] determination, and maybe my joining in, will give some heart to the great majority of us who know we are in the middle of a climate emergency…You don’t get to have the facts, the truth, and the right on your side every day. This is one of those days,” said Academy Award-winning actor Sam Waterson, Yale ‘62, who was also arrested at the action.

“Harvard and Yale can’t claim to truly promote knowledge while at the same time supporting the companies engaged in misleading the public, smearing academics, and denying truth…We’re coming together to call upon President Bacow and President Salovey to divest from the fossil fuel industry now…for the sake of our generation,” said Wesley Ogsbury, Havard ‘20 and captain of the Harvard football team in a video message endorsing the action. Ogsbury and many of his teammates wore orange wristbands to symbolize their support for divestment during the game.

The Harvard-Yale Game disruption is not an isolated action. It reflects a growing global youth movement for climate action, evidenced most recently by the global climate strikes, which on September 20 gathered over 1,500 Yale students and 1,000 Harvard students on their respective campuses.

“For seven years, the university administrations have refused to engage in real dialogue and instead stalled and silenced student voices. We’ve attempted to go through the official channels. It hasn’t worked,” said Josie Ingall, Yale ‘23. While students engaged in good faith, the head of the Yale Advisory Committee on Investor Responsibility quietly campaigned to lead a major fossil fuel company and a top member of the Harvard Corporation defended Exxon Mobil in court in New York. The only alternative to direct action is continued administrative stalling and inaction. In the face of the climate crisis, that is unacceptable.

Students are tired of Harvard and Yale profiting off of climate destruction and neocolonial investments in Puerto Rico’s debt. It’s time for more than lip service and greenwashing from academic leaders. Harvard and Yale must address the climate emergency at the scale and with the urgency it demands. This action is only the beginning.

Here's the captain of the Harvard football team saluting the students and alumni who disrupted the year's big game. He's a real leader and he and his teammates deserve everyone's gratitude https://t.co/MD7zXGpzgr