With the Democratic takeover of the Virginia House of Delegates, there are clearly going to be a *lot* of changes coming up. For instance, the House of Delegates almost certainly is going to get a new Clerk of the House, replacing long-time Clerk Paul Nardo, a Republican who used to work for Gov. George Allen (R) and Speaker Bill Howell (R).

In general, while seniority is a major consideration in deciding who will head up a committee, the Speaker (or in this case Speaker-elect Eileen Filler-Corn) does have significant power in this regard. Plus, there are cases where a member might be next in line for more than one committee, or for a committee Chair position PLUS a leadership position in the House Democratic Caucus. My understanding is that, under Republicans, leadership generally didn’t chair committees as well, as the leadership jobs are considered to be a major responsibility and time-consuming in and of themselves, leaving minimal time for the highly time-consuming job of being a committee chair. Finally, the Speaker has to look at the overall picture and work to achieve the mix she wants in terms of geographical balance, racial and gender diversity, etc, etc. Oh, and it’s possible the Speaker could break up, rename, or otherwise change certain committees. So there’s a lot to consider.

With that, here’s what it looks like right now on each committee, in terms of who’s most likely to become Chair.

P.S. By the way, it’s important to point out that who is on which committee has been largely determined over the years by Republicans, and that the Republicans didn’t necessarily have the best interest of Democrats or the issues in mind…

Appropriations: Del. Luke Torian is the ranking Democrat on this powerful committee, and reportedly wants the job, so will almost certainly get it. If not, it would likely go to Del. Mark Sickles. [UPDATE 11/14: Del. Torian was named Chair of this committee]

Counties, Cities and Towns: Del. Charniele Herring is the ranking Democrat on this committee, but she’s also going to be Majority Leader, so if Democrats hold to tradition, Herring (or anyone else in leadership) probably won’t be a committee chair.  If not, then this will most likely go to Del. Steve Heretick.

Courts of Justice: Del. Vivian Watts is ranking Democratic member on this committee, but my understanding is that she’ll probably end up chairing the Finance Committee, where she also is ranking member. If that happens, then it would potentially go to Del. Charniele Herring…but again, she’s going to be Majority Leader, so she might just focus on that job. If that’s what happens, then the next in line would be Del. Patrick Hope, who has been working on criminal justice issues for many years (e.g., see Hope Proposes Bill to Eliminate Extra Charges on Phone Calls Made by Prison Inmates, Delegate aims to get more data on Va. solitary confinement, a. Prisons to Ban the Shackling of Pregnant Inmates, ope Bill in Va. House Would Raise Grand Larceny Threshold, etc.) and has a passion for these issues. After Hope, it’s Del. Mike Mullin, who is Assistant Commonwealth’s Attorney for the City of Hampton and a Certified Gang Investigator by the Virginia Gang Investigator’s Association. So keep an eye on this one.

Education: Ranking Democratic member on this committee is Del. Roslyn Tyler, who is also ranking member on the Militia, Police and Public Safety committee. If Tyler chairs the latter, which is quite possible, then this committee would probably be chaired by Del. David Bulova. [UPDATE 11/14: Del. Tyler was named Chair of this committee]

Finance: The ranking Democratic member on this important/powerful committee is Del. Vivian Watts, and supposedly this is the committee she wants. If she ends up chairing another committee where she’s ranking member (e.g., Courts of Justice, Science and Technology), then next-in-line on this committee would be Del. Mark Keam. [UPDATE 11/14: Del. Watts was named Chair of this committee.]

General Laws: The ranking Democrat on this committee is Del. Jeion Ward, but it really depends which committee – of the three where she’s ranking Democratic member – she wants to chair.  If not Ward, then the next ranking Democrat would be Del. David Bulova, who also has options, followed by Del. Betsy Carr.

Militia, Police and Public Safety: The ranking Democrat on this committee is Del. Roslyn Tyler, who presumably will be Chair. If not, for whatever reason, then the next-ranking Democratic member is Del. Kaye Kory.

Privileges and Elections: The ranking Democrat on this committee is Del. Mark Sickles, but if he ends up chairing Health, Welfare and Institutions – which is quite possible – then Del. Sam Rasoul is the next in line, followed by Del. Joseph Lindsey.

Science and Technology: The ranking Democrat on this committee is Del. Vivian Watts, followed by Del. Ken Plum and Del. Alfonso Lopez. Again, Del. Watts also is ranking member on House Finance and House Courts of Justice, so there are choices to be made here.

Transportation: The ranking Democrat on this committee is Del. Jeion Ward, who also is ranking on Commerce and Labor and General Laws. Next in line on this committee are Del. Delores McQuinn and Del. Betsy Carr. 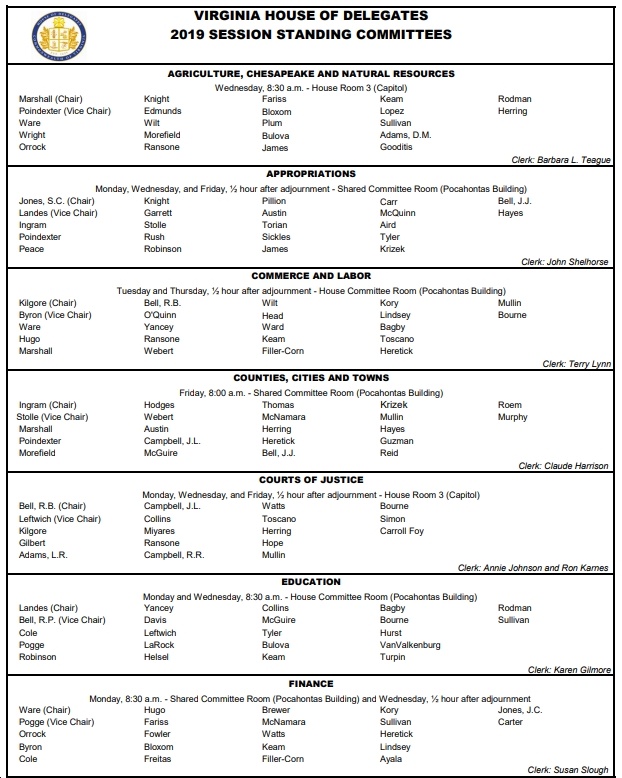 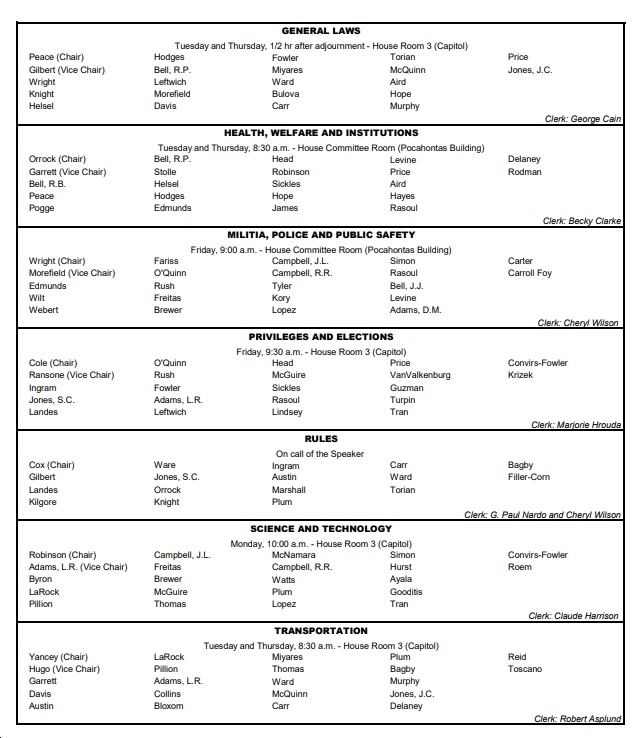 .@ChazNuttycombe - Believe It or Not, There *Still* Hasn’t Been a Single 2021 Virginia General Election Poll. Help Fund the First! ("At this point 4 years ago, we already had 14 hypothetical matchup polls between Ralph Northam and Ed Gillespie...") https://bluevirginia.us/2021/05/believe-it-or-not-there-still-hasnt-been-a-single-2021-virginia-general-election-poll-help-fund-the-first

With Just Over Three Weeks Until the 6/8 VA Dem Primaries, Here Are a Few Saturday Morning Endorsements…and Criteria For Endorsements in General https://bluevirginia.us/2021/05/with-just-over-three-weeks-until-the-6-8-va-dem-primaries-here-are-a-few-saturday-morning-endorsements-and-criteria-for-endorsements-in-general