From the Sierra Club:

Virginia — Today, the Sierra Club is launching a series of ads thanking Congressmembers Elaine Luria, Donald McEachin, and Abigail Spanberger for their support of the 100% Clean Economy Act. The ads include a radio ad and billboard running in Luria’s district as well as online ads in McEachin’s and Spanberger’s district.

“The 100% Clean Economy Act takes the 100% clean energy progress happening in Virginia to a national scale,” said Kate Addleson, Sierra Club Virginia Chapter director. “This is an opportunity to tackle the climate crisis while creating a new energy system that lifts up communities facing the worst of the climate crisis, creates new jobs, drives American innovation, reduces air and water pollution, and will protect the environment for generations to come.”

Nationally, the clean energy industry employs more than 3.3 million people, with over 92,000 jobs in Virginia.

About the Sierra Club

The Sierra Club is America’s largest and most influential grassroots environmental organization, with more than 3.5 million members and supporters. In addition to protecting every person’s right to get outdoors and access the healing power of nature, the Sierra Club works to promote clean energy, safeguard the health of our communities, protect wildlife, and preserve our remaining wild places through grassroots activism, public education, lobbying, and legal action. For more information, visit www.sierraclub.org. 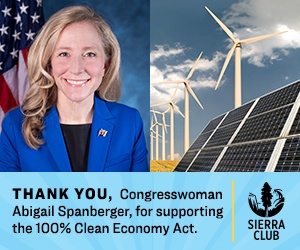 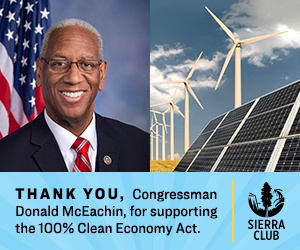