There are several bills in the General Assembly right now to address climate change and move Virginia away from reliance on fossil fuels. It’s pretty hard to make heads or tails out of them. I don’t know about you, but I only loosely know that Virginia doesn’t use much renewables at all, and that we need to build lots of solar and wind—but exactly what point A, point B, and the roadmap between look like has always been a mystery to me. When one bill says 100% renewable by 2030, or another one says 80% clean by 2035 or whatever, I have no idea if that’s feasible or not. So, I set out to learn some things, and maybe this will help someone else.

The energy that we use to power machinery, heat homes, provide electricity, move trains, trucks and cars can come from renewable sources like solar, onshore and offshore wind, hydropower, and biomass; or nonrenewable ones, like coal, petroleum, natural gas, uranium. Converting some of those sources into usable energy results in greenhouse gas emissions that contribute to global warming—how much varies by source. An approximate ranking from worst to best is: coal, petroleum, natural gas, renewables, nuclear. 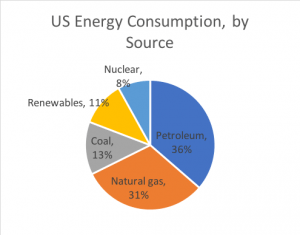 Virginia consumes almost two and a half times the energy it produces, using less coal than we produce (exporting the rest), producing far less natural gas than we use (importing from other states), and import nearly all the petroleum we consume. Virginia’s energy consumption is: 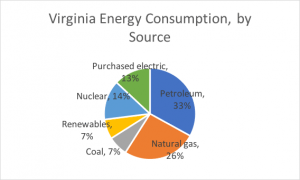 Virginia’s power sector consumes about 35% of all energy consumed annually, making electricity with it for sale and use in homes, businesses, and industrial production. The 2017 energy mix of Virginia’s electricity consumed is:

What is a renewable portfolio standard (RPS)?

A mandatory RPS, such as those proposed in HB1526 and SB851 (the Virginia Clean Economy Act), HB1451, and implicit in HB77 (the Virginia Green New Deal Act) and SB94, sets a mandatory rate of transition to renewable energy sources. But it’s not about transitioning total consumption of energy—it’s just about how much of retail electric sales by the utilities comes from renewables. So, the natural gas and coal that go straight into industrial manufacturing production, for example, are not included, nor is the petroleum or coal used in the transportation sector.

Like total energy, Virginia consumes more electricity than the utility sector generates. Some it purchases from the regional power market, PJM–Pennsylvania, Jersey, Maryland. (Sometimes Virginia’s utilities also sell to the PJM market, depending on price fluctuations.) So, the utilities might achieve these RPS goals by replacing their fossil fuel burning power plants with solar arrays and wind turbines, or they might achieve them by buying electricity from cleaner sources. (I’m going to skip discussing RECs-renewable energy credits-because things are complicated enough.)

To get an idea of what the path from point A to point B might look like, here’s a thought experiment. Let’s pretend the only renewable energy source we can use is utility-scale solar generated by our utility companies, and we need to get from the 5% renewable to 100%. The Virginia utility sector sells annually around 120 million megawatt hours of electricity to all sectors. That means they need to generate 114 million megawatt hours. Solar projects are measured in terms of their capacity—the maximum output of electricity that they can produce under perfect conditions. So a 5MW solar system, if it ran at maximum capacity all year-round (8,736 hours) would generate 43,680 megawatt hours of electricity. But obviously solar panels don’t run at maximum capacity, because there are times when the sun doesn’t shine, like at night or on cloudy days. Additionally, they might be partially blocked from direct sunlight by mountains or other geography. In fact, it’s estimated that solar panels run at about 25% of their maximum capacity. So that 5MW solar system generates instead only 10,920 megawatt hours. 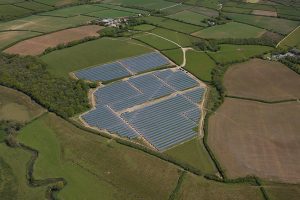 (The 5,000MW of solar that the 2018 Grid Modernization Act declared “in the public interest” would yield around 11 million megawatt hours. 5,000MW*8736 hours*.25 capacity factor. The average home in Virginia consumes 14 megawatt hours per year, so this is enough solar to power around 750,000 homes.)

To reach 100% using only solar would require adding 52,200MW of solar capacity. (This is an oversimplification, because it’s not just about how much is consumed over the course of a year in total—demand has to be met at each moment throughout the year.) If the whole amount had to be built on solar farms, each megawatt would require about 5 acres of land big enough to hold around 3000 panels including additional space for storage and buffers. So that would mean 261,000 acres of land, holding 157 million panels, would be dedicated to the solar needed to reach 100% renewable retail electricity. That’s 408 square miles—just under one percent of Virginia’s area to house enough solar panels to meet the RPS. Of course, if the nuclear plants are kept, that cuts all the numbers down significantly, so they would only need to use 154,000 acres of land (241 square miles), holding 92 million panels. Additionally, the solar does NOT need to be entirely built on the ground. In fact, it’s estimated that Virginia has the potential to locate over 32% of its solar on rooftops.

Obviously, it’s a bit more complicated than that, there isn’t just open, free land that doesn’t belong to anyone, waiting to have solar panels plopped down on it. But this is just a rough idea of the potential. I’m also purposely ignoring cost issues and/or who pays the costs because a) this is an existential crisis, and not the time to nickel and dime about this, we’re simply going to have to find the money; and b) the renewables markets are changing so quickly these days that any prices I could use to estimate costs would be outdated by the time I added a period to the end of this sentence. Also, storage technology is of critical importance to this, and I’m leaving that for another research day, along with ways to lower the amount of electricity Virginia consumes through efficiency programs.

Thought experiment number two. Now for the good news: offshore wind has a much higher capacity factor than solar, around 45% (increasing over time as the technology improves). An 8MW offshore wind turbine would produce around 31,500 megawatt hours electricity per year. To bring Virginia’s electricity sector from 5% renewables to 100% using only offshore wind turbines would require around 29,000MW of wind turbine capacity; the largest turbines currently being made are close to 10MW, so we’d need 2,900 of them to completely replace all our retail electric with power sourced by offshore wind. Keeping the current nuclear power in the mix drops the number of turbines needed to a little over 1,700. (Dominion Energy currently is seeking approval for a plan to build 220 turbines off Virginia Beach.) Requirements for spaces to locate offshore turbines is a bit more complicated than solar, because of their size, the need to run transmission lines from out at sea to a substation for use, and conflicting uses of waterways for shipping and military use. Wind turbines also have a much higher upfront cost than solar, but upkeep after they’re built is less.

I realize that’s a lot of math and numbers, and it’s mostly VERY speculative, back-of-the-envelope calculation—in reality obviously we’ll get there with a mix of solar, wind, other renewables and by reducing demand. But several things are clear, so here’s the tl;dr: